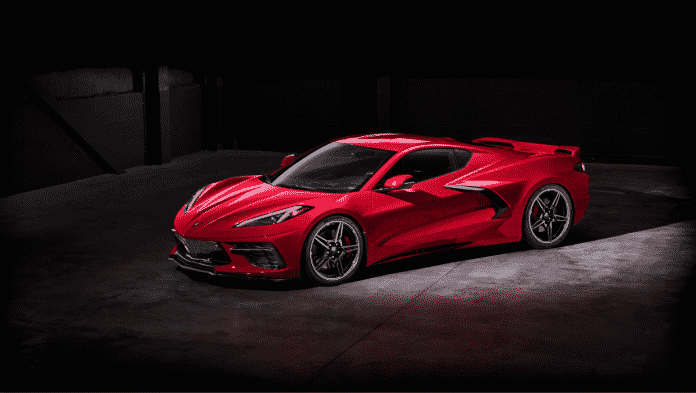 The long-awaited C8 Corvette Stingray was introduced on July 18 as a 2020 model year car arriving with a complete redesign and rethink of the way Corvettes have been built in the past. A naturally-aspirated 6.2-liter V8 sits in the middle of the car generating 495 horsepower and 470 lb-ft of torque, which is sent to the rear wheels vis an eight-speed dual-clutch transmission. There is no longer a manual option.

The driver-focused interior boasts a new squared-off steering wheel, 12-inch digital gauge cluster, a large touchscreen infotainment system, and a range of customization options including a choice of seats, stitching and shades of leather upholstery.

Underneath the mid-mounted hood is hardly where the good stuff ends, because Chevy decided to use the tech that underpins today’s hottest exotics to make the C8 both a better performance car and daily driver. Catering to the latter need is a new front suspension lift mechanism that raises the front bumper by 40 mm in 2.8 seconds so the C8 can better clear road bumps. Better yet, the system can work with the GPS to lift the car automatically when approaching an area where a driver has set it to rise, such as their own steep driveway. Drivers are also sure to love “Z Mode,” a reprogrammable button on the steering wheel that calls up an owner’s favorite custom drive modes when pressed. Speaking of drive modes, C8 owners can expect to once again see Weather, Touring, Sport, and Track modes carry over from the C7 to the C8.

And as fun as drive modes are, they aren’t as cool as the rear roof-mounted camera that displays what it’s seeing on the rear-view mirror, or the HD cameras that make up the Vette’s Performance Data Recorder.

Chevrolet says the new 2020 Corvette will start from less than $60,000, with official pricing to be announced closer to launch at the end of the year.

Not only will the C8 Corvette sell like it’s the last V8 on Earth, it’ll move mountains in the auto industry. If it’s anywhere near as good as it sounds on paper, expect waiting lists and dealership markups when it finally goes into production in late 2019. But that’s not all because the C8 is more than just another fast car. To car lovers, this reveal is more important than the Ferrari SF90 Stradale’s or Aston Martin’s upcoming DBX. It’s proof that what was once impossible is now right in front of our eyes. It’s evidence that even batteries and self-driving cars won’t take the fun out of driving, that thrilling machines won’t die out but instead get even better. Best of all, it’s a motivating hot poker jabbed right into the rear ends of the finest exotic marques, telling them that you don’t need blue blood to be a winner.

Electricity and Water Affairs Minister, Wael bin Nasser Al-Mubarak, received here today the representative of the third constituency of the Northern Governorate at the...
Read more
PR This Week