A good credit report is required when...
CultureInside BahrainAcclaimed book on Gandhi’s engagement with the Arab World launched in four languages 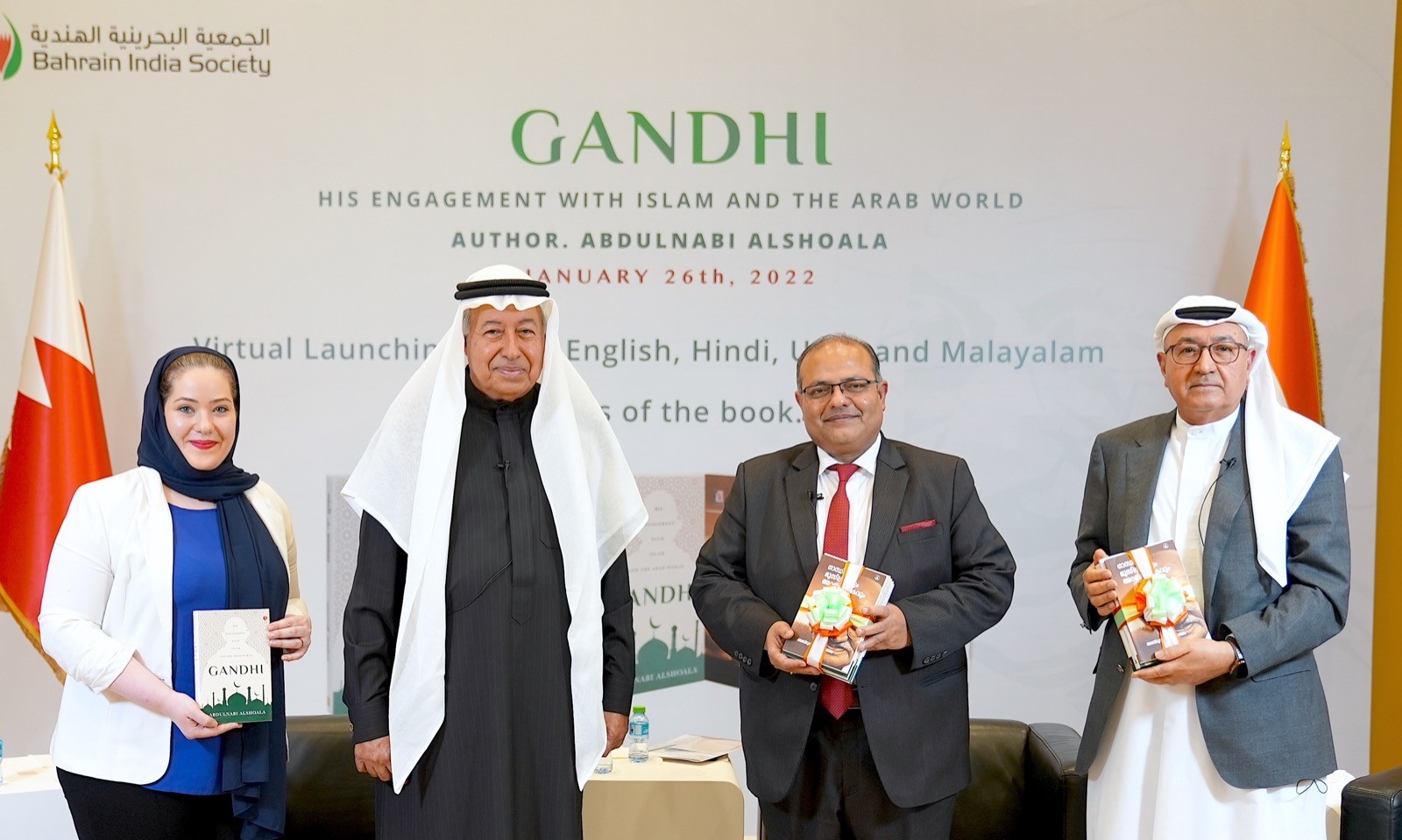 “His Engagement with Islam and the Arab World”, a landmark Arabic-language book, authored by Mr. Abdulnabi Alshoala, focusing on the great Mahatma Gandhi and his impact on the Arab world, was launched today in four translated versions – English, Hindi, Malayalam and Urdu – during a virtual event hosted via Zoom at the Isa Cultural Centre in Manama.

There was considerable interest in the launch of the translated versions of Mr. Alshoala’s book, which is now in its third printing in Arabic, because of which a sizeable audience, numbering several hundred people, tuned into the Zoomcast from Bahrain, India, Egypt and around the GCC Countries.

His Excellency Mr. Piyush Srivastava, the Indian Ambassador to the Kingdom of Bahrain and Mr. Abdul Rahman Juma, the chairman of the Bahrain India Society — who were both present in person – and Dr. Shobhana Radhakrishna, a noted, internationally-renowned Gandhi scholar and the keynote speaker who appeared through a Zoom link, joined Mr. Alshoala at the launch. The event, moderated by Sara Al Buraik, the prominent Bahrain TV news anchor, was organized by the Bahrain India Society, which was founded by Mr. Alshoala.

The launch of the translated versions of Mr. Alshoala’s acclaimed book coincides with the anniversary of India’s Republic Day, which celebrates January 26 as the date, in 1950, when the Constitution of India came into effect, replacing the Government of India Act (1935), under which the country had been governed since its independence from British rule on August 15, 1947.

Mr. Srivastava, the Indian ambassador, in a brief address, congratulated Mr. Alshoala on a brilliant and well-researched work on the life, thoughts, intellectual heritage and ideals of Gandhiji.” The ambassador added that the fact the book is now available in five languages speaks volumes for its popularity.

“It is only befitting,” Mr. Srivastava continued, “that the translated book has been launched in four languages today on the occasion of the 73rd Republic Day of India. It is also a tribute to the author, who is a distinguished intellectual, Gandhian scholar and a torch-bearer for strong bonds of friendship and partnership between India and the Kingdom of Bahrain.”

The ambassador concluded his address by saying that the book launch gained even more significance because its timing coincided with a special milestone in India-Bahrain relations. “This book launch is all the more significant,” Mr. Srivastava said, “at a time when India and Bahrain are celebrating the Golden Jubilee of the establishment of diplomatic relations. It is a celebration of our shared history rooted in trade, culture and close people-to-people connections … our bilateral relations have now further strengthened and diversified across all key sectors of political, security, economy and trade, culture and people-to-people connections.”

Mr. Juma, the Bahrain India Society chairman, said the society was honoured to be a platform for the multi-lingual launch of such a work of scholarly relevance as Mr. Alshoala’s book.”

“That the book launch should take place on such a historic day as India’s Republic Day only serves to underscore the importance of Gandhi’s message to humanity to this day and, also, Mr. Alshoala’s painstaking research and loving tribute to his personal hero,” Mr. Juma added.

The book brings to light the universality of the Mahatma’s philosophy and his eagerness to understand every world religion. This life lesson alone is a great learning in our 21st century world and it is especially appropriate that we are celebrating this book launch at the Isa Cultural Centre in Bahrain – the Late Emir Shaikh Isa bin Salman Al Khalifa embodied the spirit of “One World, One Family” which Bahrain takes to the world and which the Mahatma stressed throughout his life.”  Mr. Juma said

“It is a legacy that continues to this day, Mr. Juma continued, “under the guidance of His Majesty King Hamad bin Isa Al Khalifa – the King Hamad Global Centre for Peaceful Coexistence is also in this hallowed complex and its work is to inspire humanity’s quest for harmony and peace.”

In conclusion, Mr, Juma said: “As the world works to seek out solutions to solve problems, we all need to renew our faith in the power of compassion and togetherness as demonstrated by Gandhi. The members of the Bahrain India Society join me in wishing Mr. Alshoala success with every edition of this book – may we see many more linguistic editions and may the message of Gandhi’s humane-ness touch a million hearts.”

Having studied at the prestigious St. Xavier’s College in Bombay (now Mumbai) in the late 1960s and early 1970s, Mr. Alshoala said the book intended to both express his gratitude to India for the hospitality he received while a student and, also, to strengthen ties between India and Middle Eastern countries.

“Gandhi’s main principle was to solve differences through dialogue,” Mr. Alshoala said. “History shows that he was able to wrest the jewel of the British Empire from them through a policy of non-violence. As we look around this region and see so much conflict and wars all around, this is my humble way of suggesting that non-violence and dialogue would serve all concerned well going forward.”