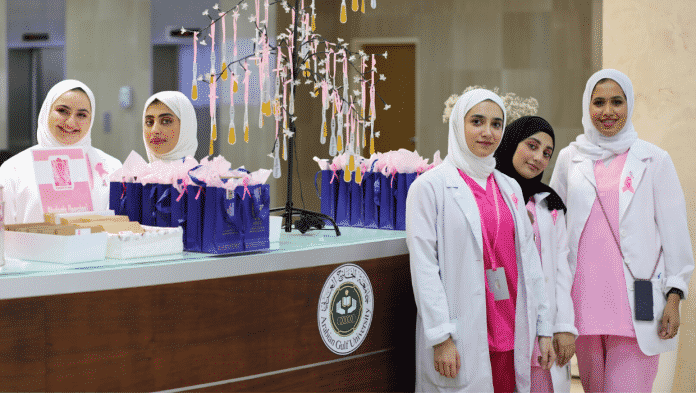 The Arabian Gulf University (AGU) has been covered in pink colour during the month of October, and that is as part of the university’s commitment to join the world in observing the Breast Cancer Awareness Month, which is globally observed throughout the month of October every year, with the aim of raising awareness on the deadly disease.

At AGU, several events and activities were organised to raise awareness about breast cancer and the means of prevention and protection from it, as well as raising funds to support the organisations and associations working in the field of breast cancer treatment and prevention.

On this occasion, Social Supervisor at the Students Affairs Deanship Ms. Aisha Al Subai’ee explained that the students of the College of Medicine and Medical Science are keen on organising such events every year, reflecting their commitment to raise public awareness on breast cancer and raise funds to support the efforts dedicated to its treatment and prevention.

The campaign was divided among several parts, which included raising and promoting awareness among students on the disease, its scenarios, treatment and the most common cases, while other parts focused on the causes, prevention steps and early detection.

It is noteworthy that one in eight women are at risk of breast cancer. This disease is more common among women, but it is possible to occur among men. Obesity or weight gain are considered as some of the factors leading to the high risk of the disease, in addition to genetic factors. Periodic self-examination, along with a healthy lifestyle, are some of the main factors that play a key role in the prevention and treatment of the disease in its early stages.