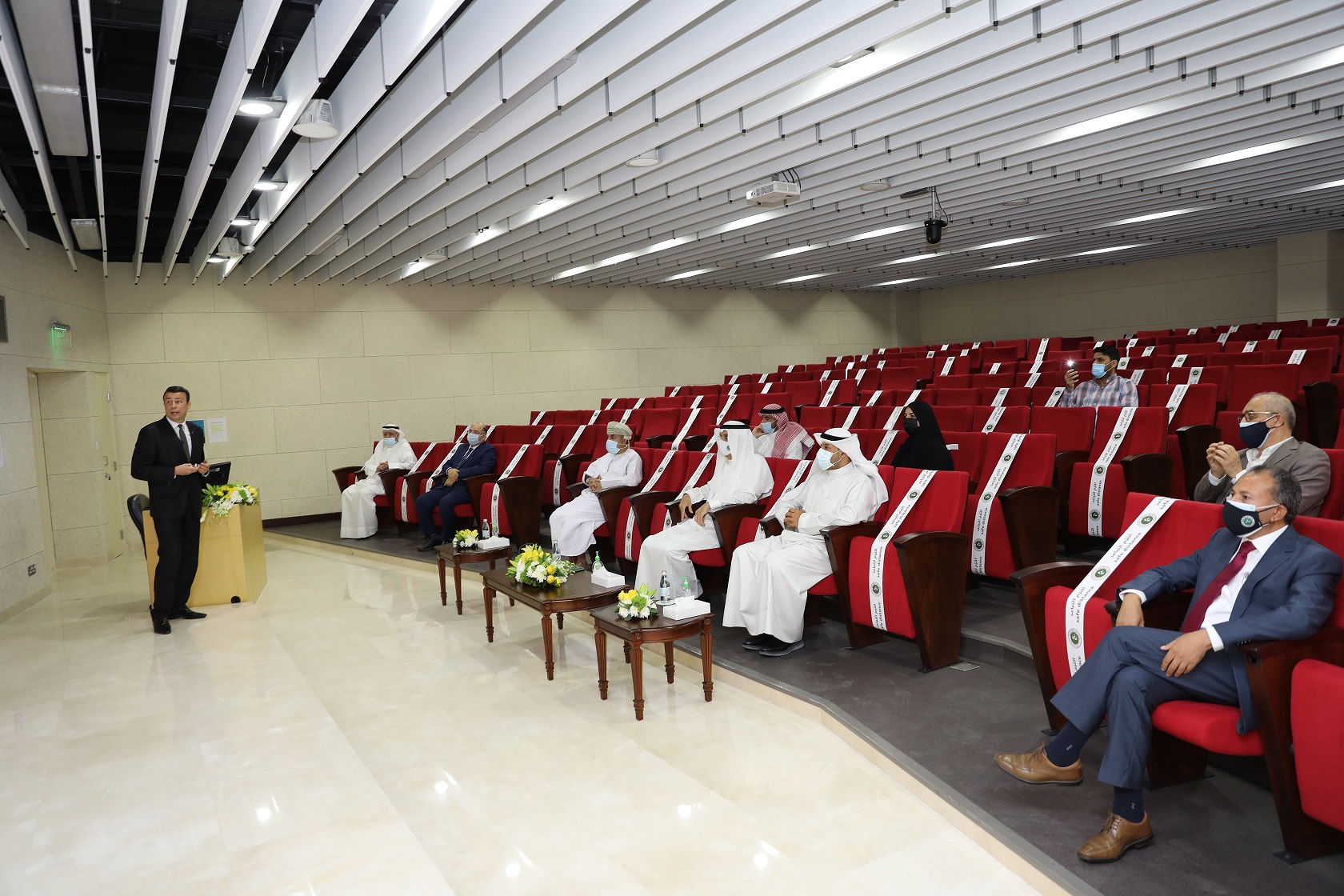 The Arabian Gulf University (AGU) launched on Tuesday, March 23, 2021 a new Master programme in Next-Generation Computing; an innovative academic programme that meets the needs of the era of the Fourth Industrial Revolution, which is mainly powered by artificial intelligence technologies, driven by big data.

On the occasion, Dr. Al Ohaly announced that the programme, which receives its first batch of students next September, comes to continue AGU’s leading approach to embrace the latest distinguished and innovative disciplines that add to the advancement of the societies of GCC states and are rare in the region.

For his part, Prof. AlMahamid explained that AGU’s graduate studies’ programmes are distinguished as a model for emulation and advancement, based on strategic aspirations for the future needs of the region, adding that it does not coincide with the common disciplines in the national universities in GCC states.

The CGS Dean also pointed out that the University has launched Master’s and PhD programmes in several innovative fields during the past few years, such as innovation management, personalised medicine and regenerative medicine, adding that the College offers more than 20 academic programmes in medical, technological, and educational specialties.

Explaining more about the new programme, Prof. Bouhoula delivered a presentation, in which he clarified the department’s specialisations, objectives and expected outputs, as well as its usefulness to various vital public and private sectors.

Prof. Bouhoula further stated that the programme includes three disciplines that fall under Next-Generation Computing, explaining that these programmes are designed based on the latest advanced computing technologies such as artificial intelligence, formal methods and quantum technology and their applications in important areas such as cybersecurity, medicine and healthcare.

“The Master’s of Artificial Intelligence and Formal Methods for Cybersecurity is distinguished from other classic graduate programmes in the field of cybersecurity, as it offers an innovative academic approach that combines the techniques of formal methods and artificial intelligence to move to the next-generation cybersecurity.

With the increase in the size and sophistication of cyberattacks, artificial intelligence helps security operations analysts to be proactive about threats. Moreover, formal methods have become well established as powerful techniques to demonstrate the absence of security vulnerability and thus to allow the construction of highly secured protocols and critical systems” Prof. Bouhoula explained.

Clarifying further, Prof. Bouhoula stated: “The new Master’s programme also includes the artificial intelligence programme in medicine and healthcare, which comes in light of what the world and the health sector in particular are witnessing in terms of the use of artificial intelligence technologies due to the successes it has achieved in early and accurate automatic diagnosis of many diseases, as well as in organising and managing the huge numbers of medical data produced in the stages of diagnosis, treatment and follow-up of patients.”

Prof. Bouhoula spoke more about this programme during the presentation saying: “These successes are represented by the ability of artificial intelligence algorithms in the reduction of human errors and ensuring high quality of health services, with the potential of reducing the prohibitive costs of comprehensive healthcare. The latest statistics indicate a significant growth in the use of artificial intelligence tools in medicine and healthcare. It is expected that the value of the global market share in this field will grow by 50.2 percent to reach USD36.1 billion by the year 2025. This is reflected on the development of the labour market, which is witnessing a great increase in the demand for experts in this field. Of course, this matter will require academic efforts to keep pace with this tremendous technological development in important areas such as medicine and healthcare.”

Prof. Bouhoula’s presentation also highlighted the third discipline of the new programme; quantum technology, which is anticipated to bring about radical changes and a scientific revolution in most of the main areas of human life.

Addressing the attendees, Prof. Bouhoula further said: “While the traditional computer relies in its work on a binary system that has only two possibilities; namely 0 or 1, or what is known as bit, the quantum computers use qubits (or quantum bits) that can exist as a 1 or 0 or both at the same time, or somewhere on a spectrum between the two. The transition from a bit to a qubit increases computing power astonishingly. For example, Recently, Google recently built a quantum computer that performed a computation in 200 seconds that would take around 10,000 years for the fastest supercomputers.

He added: “Quantum computing is expected to revolutionise many vital fields. Therefore, this programme was designed to create an academic bridge that allows students of GCC states to cross into the world of quantum computers by acquiring good knowledge and high skills in the field, in order to utilise this field in accomplishing economic and social achievements that benefit the region in various fields, such as medicine, healthcare, drug development and cybersecurity, as well as upgrading artificial intelligence technologies to the highest levels.”

It is worth mentioning that the Next-Generation Computing Master’s Programme will be delivered by a number of leading and experienced international professors in this field, enabling students of receiving education and be in close contact with the most important experts and specialists in the field.