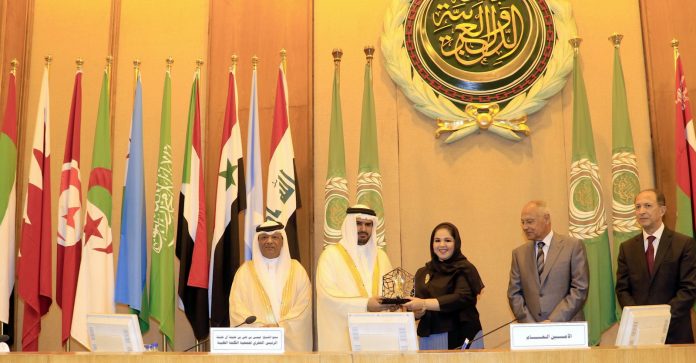 Al Mabarrah Al Khalifia Foundation(MKF) was honored as a leading national volunteer organizationduring the 7th edition of theShaikh Isa bin Ali Al Khalifa Award to honor the Pioneers of Volunteer Work during a ceremony held on Thursday 14th September 2017 at The League of Arab States in Cairo,Egypt.

“This award enhances MKF status and vital role, which would not have been possible without the great efforts of the foundation members, who deserve our thanks and appreciation,” she added

MKF seeks to instill a sense of social responsibility among the young Bahraini and encourage them to participate in volunteer work along with motivatingthem to innovation and creativity.

A total of 660 students have joined MKF scholarship program “Rayaat” since it waslaunched in 2011 as a comprehensive approach to education and developBahraini youth’s personal skills. The program provides scholarships to students at accredited universities in the Kingdom of Bahrain. It also offers financial incentives, workshops, training opportunities in governmental and private sectors.“Ithra” targets participants aged 14-17 years are given the chance to experience exciting learning opportunities through mental and physical activities. Mentors are enabled and empowered with necessary training to be able to coach and help shape the participants’ future.420 students enrolled in “Ithra” while 240 students joined “Rayaat” and 58 graduated.

Shaikh Isa bin Ali Al Khalifa, Honorary President of the Good Word Societycongratulated all the honored who greatly contributed in servicing their communities and praised the role of the League of Arab States in hosting the 7th edition of Volunteer Work Award celebration.

He also expressed his deep appreciation to Mr. Ahmed Aboul-Gheit, Secretary-General of the Arab Leaguefor this initiative, which reflects the League’s current orientation towards supporting voluntary work in Arab countries through launching Civil Society Organizations 2016/2026 last year, that came as part of NGOs role in supporting the development process under the great challenges facing our countries to implement comprehensive development plans to achieve stability and well-being of Arab citizens.

Al Mabarrah Al Khalifia Foundation (MKF) is a non-profit foundation registered and licensed by the Ministry of Labour and Social Development. Established in 2011 in the Kingdom of Bahrain, its aim is to make a social impact in the education field and to empower Bahraini youth to reach their optimum potential. By providing Bahraini youth with knowledge, skills and character, it is hoped that they will be able to develop themselves and their Kingdom further.

On behalf of His Majesty King Hamad bin Isa Al Khalifa, HM the King’s Personal Representative and President of the Supreme Council for Environment...
Wheels and Gears

The all-new 2021 Mercedes-Benz E-Class Sedan has now arrived in the Kingdom of Bahrain. First unveiled at The Avenues – Bahrain, the 2021 E-Class...
iGA