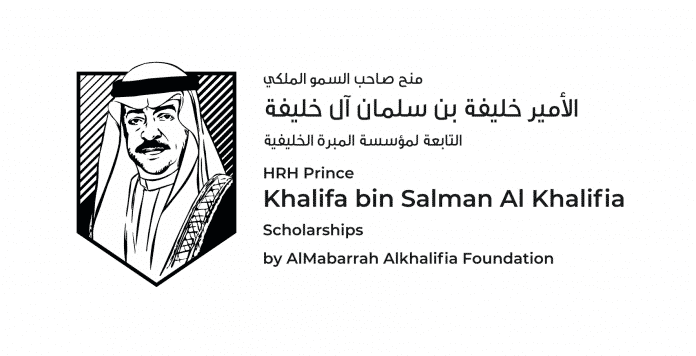 AlMabarrah AlKhalifia Foundation announced the launch of a new scholarship in honor of His Royal Highness the late Prince Khalifa bin Salman Al Khalifa, may he rest in peace, as part of the Rayaat Scholarship Program. This initiative marks the remembrance of His Royal Highness Prince Khalifa bin Salman Al Khalifa, who was a major supporter of the Foundation since its establishment, as it came as part of the late Prince’s efforts and directives.

The late HRH Prince Khalifa bin Salman Al Khalifa, greatly appreciated the importance of education, believing that it was an investment paramount to the citizens of this country and is the basis for every successful community. Due to his devotion in the matter, the education sector witnessed an advanced shift across various stages which created a cultured and educated generation that contributed to building a modern Bahrain.

Through this initiative, AlMabarrah AlKhalifia Foundation is providing seven Bachelor’s degree scholarships in collaboration with the Royal College of Surgeons in Ireland – Medical University of Bahrain (RCSI Bahrain), the British University of Bahrain, Ahlia University, as well as, Bangor University and the University of London in partnership with the Bahrain Institute of Banking & Finance (BIBF).

Commenting on this occasion, Her Highness Shaikha Zain bint Khalid Al Khalifa, Chairperson of the Board of Trustees of AlMabarrah AlKhalifia Foundation, said: “AlMabarrah AlKhalifia Foundation is honored to be launching scholarships in tribute to His Royal Highness the late Prince Khalifa bin Salman Al Khalifa, may he rest in peace, which recognizes and honors the memory of His Highness and expresses our gratitude for all that he has provided to this beloved Kingdom and its citizens, as well as his unlimited contributions and unwavering support to the Foundation and all of its programs and activities.”

“His Highness was always a great inspiration to us all, we learnt the value of giving, taking responsibility and serving the citizens of Bahrain from him. We believe that everything we have achieved in terms of accomplishments, goals and services is first and foremost thanks to Allah, then to His Highness and his continuous care for the Foundation. We are determined to continue to serve the Kingdom of Bahrain under the leadership of His Majesty King Hamad bin Isa Al Khalifa and the Crown Prince and Prime Minister His Royal Highness Prince Salman bin Hamad Al Khalifa. I would also like to thank all the participating universities for their cooperation and support of this initiative, which contributes greatly to our goal of empowering young Bahrainis and increasing their chances of achieving their academic dreams at the best educational institutions in the Kingdom through the Rayaat Scholarship Program.”

The Rayaat Scholarship Program was launched in 2011; it follows a comprehensive approach to the education and personal development of Bahraini Youth by providing them with scholarships at accredited universities in the Kingdom, in addition to other training opportunities in the public and private sectors, with the aim of developing skills among the students by providing them with necessary workplace ethics. The program also aims to enhance the concept of social responsibility towards the Kingdom and encourage students to participate in volunteer work to serve the local community.

Registration for HRH Prince Khalifa bin Salman Al Khalifa scholarships commence on 11th April  2021. Rayaat Scholarship Program applicants will have to be accepted into one of the selected universities before applying to the program. The application stage will continue for two full weeks, from 11th April to 24th April 2021. The selection process will be held under the program’s guidelines, on the basis of the applicant’s academic achievements, personal interview, an evaluation test, and volunteer work, as well as the applicant’s personal accomplishments. For support and inquiries, please contact AlMabarrah AlKhalifia Foundation via phone: 17499909 or email: [email protected].