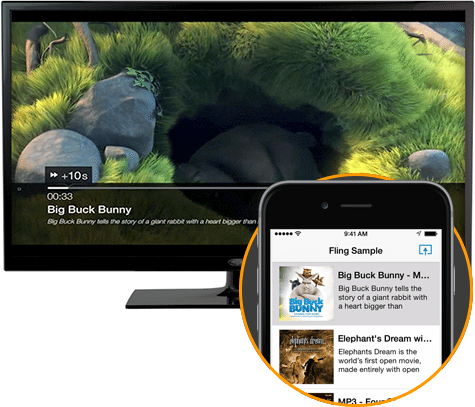 Amazon introduced the new “Amazon Fling” service which is available as an SDK for iOS and Android applications. Amazon Fling allows developers to build apps that can send media content to Amazon’s Fire TV as well as work as “second screen” or companion apps to what’s already running on Fire TV.

“Flinging,” which is basically Amazon’s own version of Chromecast’s “casting,” lets a mobile app maker send a video, audio or images from their iOS or Android app to a user’s big screen TV by way of the Amazon Fire TV media player. It does this by simplifying the underlying network discovery and communication technologies that would otherwise be difficult to implement, the company explains.

With Amazon Fling, Amazon made a point to appeal to developers who are already leveraging Chromecast functionality in their apps by making it possible to integrate the new Amazon SDK with an existing Android or iOS Chromecast app.

To simplify the process, the company released developer documentation that explains how to modify an existing app that’s using the Google Cast Companion Library to also support Amazon Fling. In addition to flinging media, the SDK also lets developers build out companion apps that work with Fire TV, says Amazon.