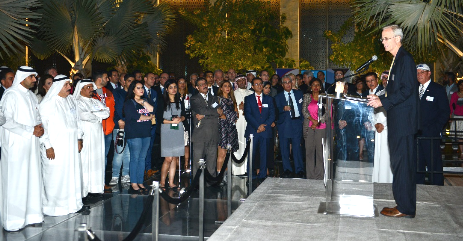 The American Chamber of Commerce – Bahrain (AmCham Bahrain) held its 2nd networking reception for U.S. Alumni in Bahrain on 13 November at the Four Seasons Hotel, Bahrain Bay. The event provided a platform for U.S. university graduates to reconnect with the U.S. alumni community of business leaders who share the unique experience of studying in the U.S. and bringing their knowledge, skills and visions to benefit Bahrain.

H.E. William Roebuck, U.S. Ambassador to Bahrain was the honorary guest speaker at the event.  H.E. Shaikh Mohamed bin Khalifa Al Khalifa, a graduate of DePaul University was the senior government official attending the event.  More than 81 universities were represented at the event among the 200 attendees.

In his welcoming remarks Qays Zubi, AmCham Bahrain President stated “U.S. alumni in Bahrain include government and business leaders at the highest levels and throughout all industries who have made significant contributions to Bahrain, as well as, a growing cadre of more recent graduates who are on their way to making valuable contributions to Bahrain.”  Mr. Zu’bi went on to say, “AmCham’s intent in developing a US Alumni Network is to build an active alumni community of leaders who share the unique experience of studying at an American school and bringing their knowledge, skills and visions to benefit Bahrain; to provide opportunities for networking and knowledge sharing; and to build upon the good will that comes from education and a cross cultural experience.”