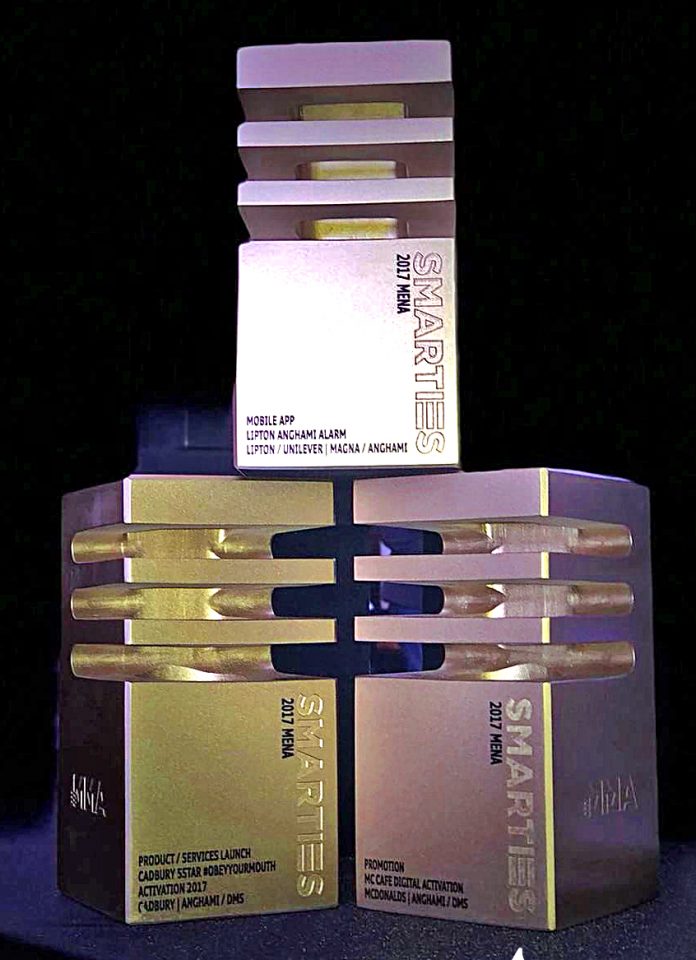 Anghami, the leading music streaming company in the MENA region, won a sweeping four awards at the MENA 2017 MMA Smarties Awards, three Golds and one Silver for three of its campaign: the Cadbury 5STAR #ObeyYourMouth activation 2017, the Lipton Anghami alarm and the Mc CAFE digital activation campaigns. Campaigns were produced with the support of Anghami’s exclusive media representatives DMS – the digital arm of Choueiri Group.

The “Cadbury 5STAR #ObeyYourMouth activation 2017” campaign won the Gold Award for “Best Product/ Services Launch”. This prize recognizes launch campaigns which have mobile at heart, and which deliver measurable success. Anghami and Cadbury came on top of the pack in both when their campaign redefined the approach for advertising, by rewarding users for content creation rather than creating a campaign that purely promotes client’s content. This campaign also won the Silver Award for “Best Mobile app”.

The “Lipton Anghami Alarm” campaign also won the Gold prize in the same category for offering users an experience to wake up to music. This award distinguishes an application that provides information, entertainment, productivity or utility for the customer.

The “Mc CAFE digital activation” campaign won top place in the promotion category. Anghami leveraged its technology, data and music library to create personalized playlists to each user on Anghami, that reflect a specific product.

Paul Akiki, Chief Brand Officer at Anghami, said: “Watching Anghami claim four awards in this prestigious global industry event shows the scale, drive and creativity of our platform. I am glad to see our partners, clients and team rewarded for their out-of-the box ideas to communicate with a product. Adopting the latest trends gives brands the opportunity to connect with consumers in new and disruptive ways that respond to their tastes.”

DMS’ Chief Operating Officer, Michel Malkoun, also commented that: “These wins for Anghami speak volumes for the potential and scope of this platform, as an invaluable and highly-innovative communication platform, which continues to break free from the ordinary, resonate and entertain audiences around the MENA region. We are honored at DMS, to have played a role in this success story, for both Anghami as well its advertising partners and look forward to creating many more.”

The SMARTIES Awards is a global awards program created specifically to recognize best-in-class mobile work from around the world. It is judged equally on creativity, strategy, execution, and results. DMS and Anghami received the awards at the ceremony held in Dubai. The event and awards evening gathered top influencers from brands, agencies, publishers, operators and technology providers.

A busy academic year ahead, compounded with the pressures of maintaining social distancing, may find some students feeling overwhelmed. Such challenges have been a...
Read more
Inside Bahrain

stc Bahrain, a world-class digital enabler, is the first telecom operator in Bahrain to venture into Roadside Assistance and Home Assistance services, expanding its...
Wheels and Gears