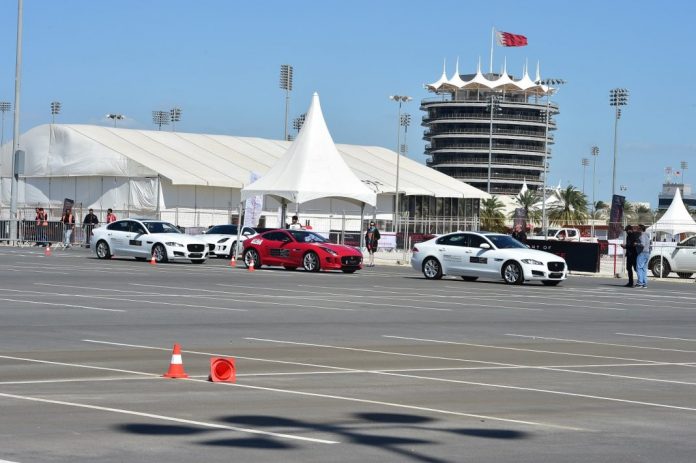 Jaguar Land Rover along with its exclusive importer and distributor in the Kingdom of Bahrain, Euro Motors, celebrated the 2nd year anniversary of the Land Rover Experience Centre Bahrain, by holding a spectacular two day event at the Bahrain International Circuit (BIC) in Sakhir.

The celebratory event, which was held on the 17th and 18th of February 2017, for VIPs, media representatives, guests as well as customers, included an experience on the Land Rover Experience course. The semi-final of Jaguar’s Art of Performance Tour was also held for the very first time in the Kingdom of Bahrain, where Jaguar fans were thrilled to experience a ride of a lifetime at the Jaguar Dynamic Drive event. During the two-day event, Land Rover Experience Centre Bahrain delivered over 170 driver experiences that were thoroughly enjoyed by all the participants. Taking it a step further, the Centre also conducted a number of activities that catered to all age groups, including a one of a kind Land Rover Experience children track.

With the Land Rover Experience Centre Bahrain being the first of its kind in the MENA region, it was designed to cater to both the local Bahraini and regional market and it has been doing so successfully for the past two years. During the successful two years, the presence of the Centre in the Kingdom along with the number of visitors per day has been growing exponentially. The Land Rover Experience lounge was also revamped and refurbished to better suit the needs and comfort of the guests and customers.

For the first time ever, Euro Motors Jaguar Land Rover also hosted the semi-finals for the Jaguar’s Art of Performance Tour. Guided by Jaguar’s expert drive instructors, this tour allows enthusiasts to drive and push the Jaguar vehicles to the limits through exhilarating challenges, including the Smart Cone Challenge, which uses wireless technology to randomly illuminate pairs of cones to set out a different route each time. With millions of different potential options taking place in real time, the technology provides a unique test of driving skill, precision and reactions.

Speaking on the occasion, Mr. Nawaf Khalid Al Zayani, the Managing Director of Euro Motors, said: “Having just celebrated the 2nd year anniversary of the Land Rover Experience Centre in Bahrain, I am proud to say that the event was a grand success and proves to be a continuing success for Euro Motors Jaguar Land Rover. We are glad to have witnessed such a favourable turnout for our Second Year Anniversary celebrations and this was our way of giving back to our customers, as we continuously strive to prioritize their needs and desires. We are also immensely proud that the semi-finals of the Jaguar’s Art of Performance Tour took place smoothly and I would like to take this opportunity to congratulate the finalists of the Tour.”

Located in the heart of the Sakhir desert within the grounds of Bahrain International Circuit (BIC), ‘The Home of Motorsport in The Middle East’, the Land Rover Experience Centre Bahrain covers 3.5 kilometres of varying terrains such as sand, rock, hill and water landscapes. There are 32 natural and man-made obstacles allowing guests to traverse terrain including slide slopes, humps, rocks, gravel roads and watercourses, all the while assessing the driving environment, maximising the capability and technology of the vehicle and most importantly developing driving skills in the world’s most capable luxury vehicles. In addition to the existing obstacles at the Land Rover Experience Centre, a new obstacle called the ‘Peanut’ was introduced, which tested the handling and suspension of the vehicles.

Lulu Hypermarket is celebrating its 13th anniversary of being a retail leader in the Kingdom of Bahrain with a grand ‘Shop and Win’ e-raffle...
Read more
Spotlight