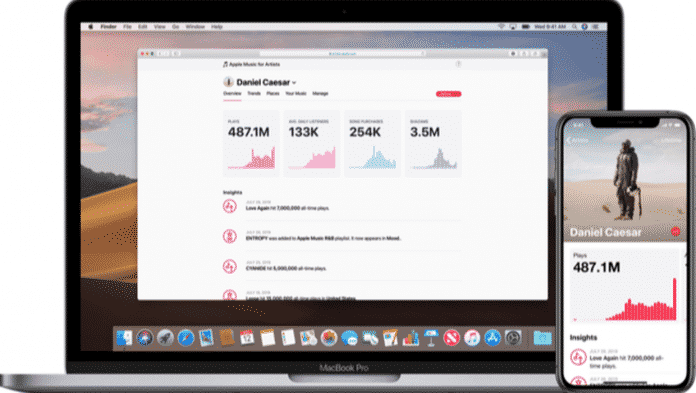 Apple Music has announced that its analytics platform for musicians, called Apple Music for Artists, is out of beta  and available for all. These types of back-end dashboards are invaluable for artists to get insights about how their music is performing on a platform across the world.

Apple Music for Artists has been around in beta since mid-2018, and much of what was around then is still around now. It’s just been tweaked and refined as musicians have given their input. Basic dashboard stats like your overall plays, song purchases on iTunes, and radio spins — on Apple Music editorial and algorithmic stations — are still front and center, badges are still automatically awarded for hitting milestones and personal bests, and artists can upload their own profile image.

There are a ton of insights you can check out down to the city level in over 100 countries, and all of this data and activity about streams and sales can be viewed either in lists or on a visual heat map. I’ve always loved that Apple Music for Artists displays this info both ways; if an indie artist wanted to look at planning a tour, looking at a heat map would be an easy way to start mapping a route or figure out how to adjust a setlist from city to city.

You can view basic demographics about your listeners like age, gender, and cities where songs are being played. But because of Apple’s strict privacy policies, you can’t cross-reference two sets of data. You couldn’t, for example, look at how many 18- to 25-year-olds are listening to one of your tracks in New York.

While the fundamentals have stuck around, there are also plenty of additions. Apple Music for Artists is now available both on a web dashboard and on a new standalone iOS app for the iPhone. It’s a massive extension that will let artists view their stats anywhere, on the fly. There are also new metrics, like music video views and performance, daily listeners (which can be viewed by country, city, or song), and more detailed information about playlists to which your songs have been added and their positions on those playlists.

Another new thing that’s of particular interest is the integration of Shazam. Artists can now see their Shazam data, including the top shazamed cities and countries. This can be really useful to figure out which tracks are worth pushing. A track might not have a ton of plays, but it could have a spike in shazams, pointing out that there’s bubbling and active interest.

Apple Music for Artists is now available for every artist on Apple Music. Artists can sign up and claim their account on Apple’s dedicated site.

Capital Governor, Hisham bin Abdulrahman, has followed up on the distribution of 3,000 food baskets, within the “Your Food at Your Home” initiative launched...
Uncategorized

The planned resumption of Friday prayers on June 5 has been postponed, the Ministry of Justice, Islamic Affairs and Endowments has said. The decision was...
Spotlight