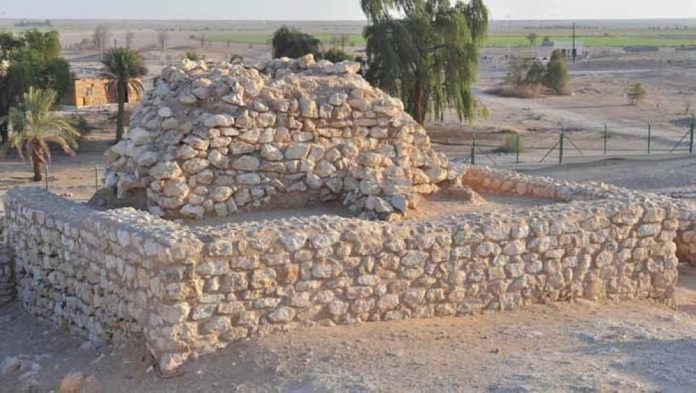 During 1992-1995, the Sultanate, in cooperation with the University of South Missouri, explored this historic site on top of a limestone hill.

Although archaeologists discovered small sites scattered in the area dating back to the Stone Age (5000-4000 BCE), settlement events in the region was there during the Iron Age (325 BC – 625 AD), where some pottery and frankincense tools were found in the castle. They belong to the first century BC to the middle of the Islamic era.

The office of His Majesty the Sultan’s Advisor for Cultural Affairs is conducting with the University of Pisa, Italy, surveys, excavation, restoration and archaeological preservation according to the standards adopted by UNESCO.

Wabar Archaeological Site contains sites dating to the Neolithic and the Iron Age. Wabar was a point of control in freshwater sources in the south of the Empty Quarter and an active commercial centre for the collection and operation of commercial caravans across the Arabian Peninsula.

Many archaeological discoveries were found in Wabar, dating back to different periods of time, the most important of which are chess pieces, pottery and stone vessels, glassware, stone lamps, incense burners, tools, flint tools, wooden plates, arrowheads and iron weights. The landmarks of the discovered castle show the existence of places to manage the site and stores while the towers were used for housing.

Wabar area has attracted the attention of historians and travellers. Traveller Bertram Thomas described it in his famous journey in 1930 through the desert of the Empty Quarter as an ancient city rich in treasures, referring to the palm gardens and its red citadel and its waters. The region was also mentioned in the writings of Arab historians, such as Al Tabari, Al Thalabi and Al Hamdani, who spoke about the wealth of this region and the flourishing of frankincense and incense.

It is worth mentioning that the Office of H.M the Sultan’s Advisor for Cultural Affairs is developing the Frankincense Land Sites, registered in the World Heritage List and providing it with service and aesthetic facilities in order to promote cultural and archaeological tourism in the Governorate of Dhofar.

The Ruler of Sharjah officially accepted the Unesco World Book Capital title for the emirate during the grand ceremony at Al Majaz Amphitheatre on...
Read more