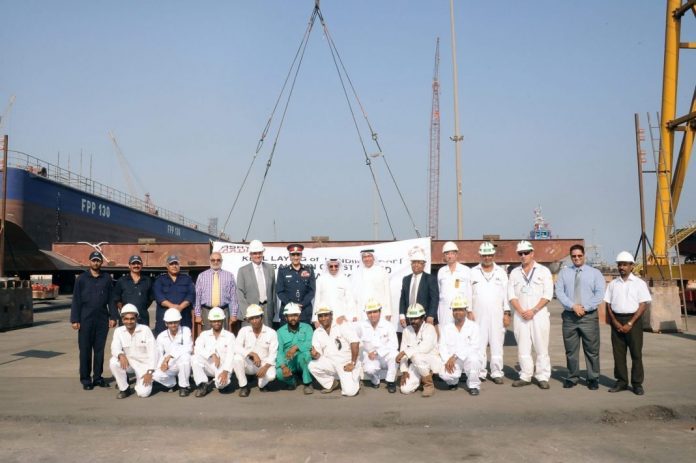 ASRY, the leading ship and rig repair yard in the Arabian Gulf, has marked the commencement of erection of a new Landing Craft being constructed for the Bahrain Coast Guard (BCG) with a keel-laying ceremony. The event was attended by the yard’s Chairman Shaikh Daij Bin Salman Al Khalifa, Alternate ASRY Board Director Hassan Ali Al-Majid, ASRY Chief Executive Nils Kristian Berge and BCG Brigadier Ala Abdulla Seyadi.

“As we lay this keel, we are seeing progress on the project continuing on schedule, with over 50% of steel cutting already completed, and steel panel assembly well underway,” confirmed ASRY New Construction & Engineering Senior Manager, Sauvir Sarkar, who is overseeing the project. Proceedings also included a tour of the steel production facility and a presentation in which a full progress report was presented to Brigadier Ala Abdulla Seyadi and his team. In the presentation, the interactive communication between ASRY and the BCG was highlighted, as several improvements to the project have already been made as a result of the regular cooperative meetings between the two parties development teams. Lt Col Jahangir Sarwar, BCG’s project manager, also praised the benefits of these fruitful interactions.

The Landing craft, to be delivered in the first half of 2016, marks ASRY’s first newbuild contract since launching the New Construction & Engineering division, which is tasked with growing the new construction programme at the yard. It will be approximately 34.5m in overall length, with two 500 Kilo watt engines, having a top speed of 10 knots and cargo deck capacity of 40 tonnes. ASRY already has experience in the new construction sector having built Offshore support vessels, ASD tugs and power barges.

I was a novice when I stepped into the business field. Until then I had had no background or experience of running a shop....
Read more
Inside Bahrain