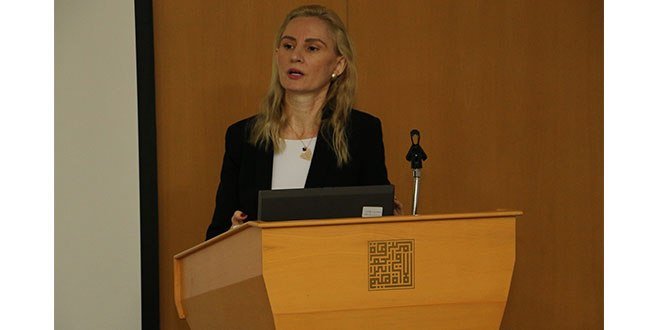 For the sixth consecutive year, Al Jawhara Centre for Molecular Medicine, affiliate of the Arabian Gulf University (AGU),  is launching a national awareness campaign for rare diseases in early February.

This in conjunction with World Rare Disease Day, which falls on February 28 annually, held this year under the slogan «Show your rare, show your care».

Dr Cristina Skrypnyk, Medical Genetics Consultant at Al Jawhara Centre and Head of the Organising Committee said, “This year’s celebration will focus on scientific research on rare diseases and its importance in opening limitless possibilities in treating patients, facilitating diagnosis and finding them treatment.”

Diseases are classified as rare when they afflict one in every 2000 people. There are 100 million individuals in the world afflicted with a rare disease and nearly 15 million in the Arab world. Most rare diseases are genetic, and accompany the patient for life, although the effects of some may only manifest at an older age.

The campaign will launch at the Arad Seef Mall on 10 February, 2018, with an awareness exhibition that includes the distribution of souvenirs and awareness leaflets, in addition to a big celebration at the Bahrain City Centre Mall on February 23, 2018. The events at AGU and Al Jawhara Centre will also include recreational competitions, direct answers and consultations for visitors, with the participation of AGU medical students. In addition, an awareness seminar entitled “Genetic Diseases – Translating Research into Clinical Applications” will be organised by Al Jawhara Centre targeting doctors and researchers in the field of genetics.

On 28 February, a meeting will be held with patients of rare diseases in a special event to discuss the importance of early detection and what can be provided to patients with rare diseases, from diagnosis to aid in developing a better lifestyle to cope with the rare disease, aiming to share their experiences and provide support.

Dr Skrypnyk thanked AGU and BAPCO for their support of this awareness campaign aimed at developing the health and scientific fields in the Kingdom of Bahrain.