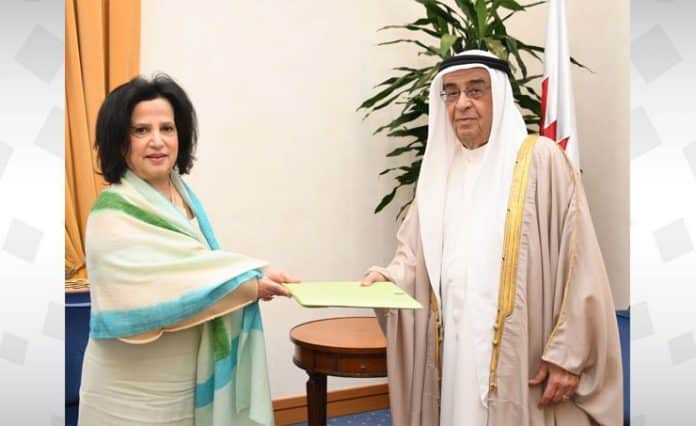 Shaikha Mai briefed HH Shaikh Mohammed on the book “Dilmun Land of Density” dedicated to celebrating the incredible density of the historical and cultural assets of Bahrain.

In this context, Shaikha Mai presented the four projects that BACA will launch during this year:

The opening of the pedestrian bridge linking the Bu Maher Fort with the beginning of the Pearling Trail, inscribed on the list of the World Heritage. The bridge to be used by visitors to the trail will be completed next year.

The completion of the project for the restoration of Al Fadhil Mosque minaret after restoring its details as they were when it was built to harmonize with the unique urban look in the capital, Manama.

The opening of the textile factory in Bani Jamra that aims to revive and revitalize the textile trade for which Bahrain has been known for more than a century.

The Sound and Light Project in the Shaikh Salman bin Ahmed Al Fateh Fort in Riffa that narrates the history of Al Khalifa family in Bahrain.

HH Shaikh Mohammed expressed his appreciation of the efforts by BACA and Shaikha Mai to launch programs and projects in various regions of the Kingdom to revive its heritage, root its culture and propagate its history and ancient civilization.

Shaikha Mai expressed gratitude to HH Shaikh Mohammed for his support to BACA in its endeavors to highlight Bahrain’s history and culture locally and internationally.

A number of business owners have extended their appreciation to Batelco for the financial support towards their fixed internet cost for 3 months in...
© GO ALIVE MEDIA
MORE STORIES