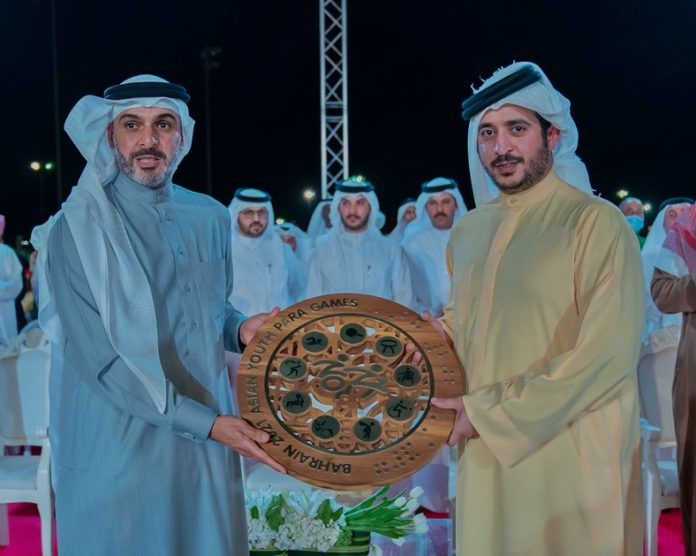 His Highness Sheikh Khalid bin Hamad Al Khalifa announced the opening of the Asian event, saying: “The Asian Paralympic Games for Young People is an important global sporting event, hosted by the Kingdom of Bahrain as the embodiment of the generous guidance of His Majesty King Hamad bin Isa Al Khalifa, The King of the Country, who is blessed with his Majesty’s efforts and giving in order to make Bahrain the seat of the most important sporting events, amid the support and support of the distinguished government led by His Royal Highness Prince Salman. Bin Hamad Al Khalifa, Crown Prince, Prime Minister, May God save him, and follow-up His Highness Sheikh Nasser bin Hamad AlKhalifa.”

His Highness welcomed the guests of the Kingdom, wishing them good stay, success and success, expressing his appreciation for the great efforts made by the high organizing committee of this session headed by His Excellency Sheikh Mohammed bin Da’ij Al Khalifa, Chairman of the Bahrain Paralympic Committee, and the efforts of all working committees, to prepare and prepare for the organization of this continental demonstration in an honourable form worthy of the reputation and status of the Kingdom of Bahrain.

The athletes from the 30 countries who are competing at the Games entered the arena followed by His Excellency Shaikh Mohamed bin Duaij Al Khalifa, President of the Bahrain Paralympic Committee, and His Excellency Mr. Majid Rashed. A video of the ParaOlympic Games was shown during the event.

Sheikh Mohammed bin Da’ij Al Khalifa, Chairman of the Bahrain Paralympic Committee, gave the opening remarks: “Asia today celebrates the opening of the Fourth Edition of the Asian Paralympic Games and the largest youth gathering of Asian Paralympic sports, and we welcome guests and participants in their second country, the Kingdom of Bahrain.”

“We thank Bahrain and its leadership for hosting the session in which Bahrain has worked to deliver the kingdom’s message by providing an exceptional version that will inspire young people.” said His Excellency Majid bin Rashid al-Assimi, Chairman of the Asian Paralympic Committee during his opening remarks.

After urging the athletes to make the most of the opportunities that the Games were giving them, he ended his address by inviting Highness Shaikh Khalid bin Hamad Al Khalifa, First Deputy Chairman of the Supreme Council for Youth and Sports, President of the General Sports Authority and President of Bahrain Olympic Committee to open the Games.

The flag of the Asian Paralympic Committee was raised and the anthem of the committee was played, and then the oath was performed by a number of players, and the Goodwill Ambassador of the United Nations Development Program professional endurance sports Michael Haddad walked steps in support of the championship, and concluded the ceremony with an entertainment show and then ignited the flame of the Asian ParalympicGames.

The first pool matches which took place on 1 December saw I.R. Iran beat the Philippines and Jordan, whilst host country Bahrain got their championships off to a good start with victory over Saudi Arabia but unfortunately lost out to the Philippines at the end of day 1. Iraq was also victorious, beating Thailand 42-31.

Badminton started on 2 December and India and Korea laid down a marker, with India winning five of their matches and Korea four of theirs. In Boccia pool matches in the individual competition started with Male and Female events for the first time at the Asian Youth Para Games. In Goalball both Thailand’s men’s and women’s teams won their first matches and there were victories too for Iran and Korea’s men’s teams.