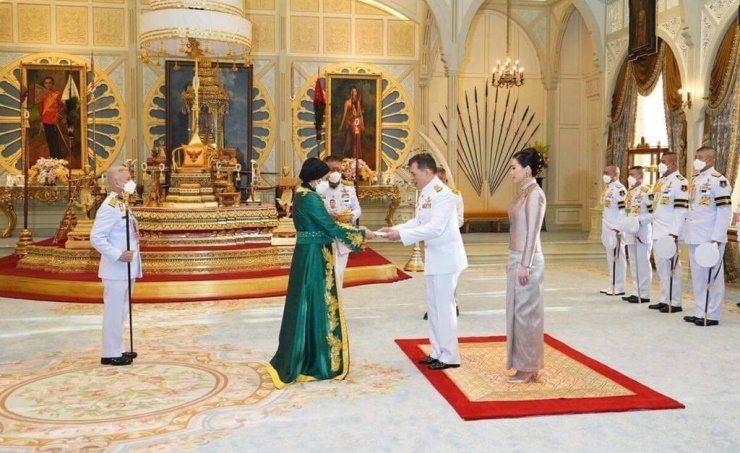 Ambassador Mona Abbas Radhi presented her credentials as Ambassador Extraordinary and Plenipotentiary of the Kingdom of Bahrain to the Kingdom of Thailand to His Majesty King Maha Vajiralongkorn of Thailand, in an official ceremony held in the Throne Hall at Dusit Royal Palace. The ceremony was also attended by the Thai Deputy Prime Minister and Foreign Minister and a number of officials and ambassadors.

The ambassador conveyed the greetings of His Majesty King Hamad bin Isa Al Khalifa and His Royal Highness the Crown Prince and Prime Minister, Prince Salman bin Hamad Al Khalifa, to His Majesty the King of Thailand, and their wishes for his country and people of further progress and prosperity. She also expressed her pride in representing Bahrain in Thailand, and in contributing to promoting relations between the two friendly countries.

For his part, His Majesty the King of Thailand requested the ambassador to convey his greetings to His Majesty the King and HRH the Crown Prince and Prime Minister, and his wishes for the government and people of Bahrain of further development. He also wished success to the ambassador in her duties to boost relations of cooperation and friendship between the two countries in various fields.