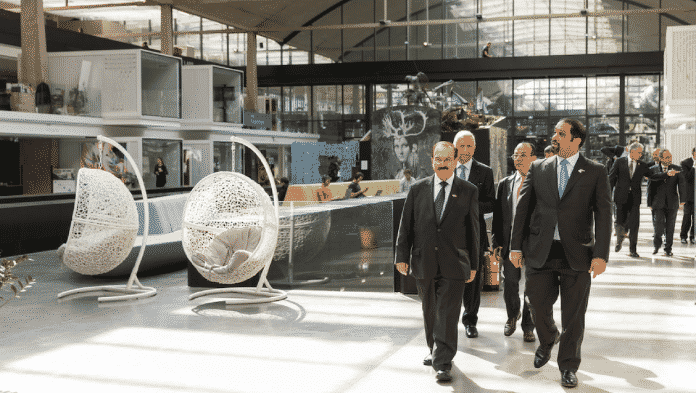 The Bahraini business delegation who  accompanied His Majesty King Hamad bin Isa Al Khalifa on his official visit to France, made stops at Station F, the startup campus in Paris, and Ḗcole 42, an innovative programming college.

During the visit to Station F, the delegation was treated to a detailed overview of the campus and the benefits it offers to promising entrepreneurs. Members of the delegation were impressed with France’s outstanding global pioneering experience in technology, which brought comparisons to Bahrain’s own aspirations to transform itself into a regional hub for entrepreneurs and startups. The Bahrain Economic Development Board (EDB), along with partners from the public and private sector, have been working relentlessly to support startups and create an environment that empowers entrepreneurs.

In line with the goals of the EDB and its partners from the public and private sectors, the delegation’s visit to cole 42 focused on the college’s world-renowned educational model. The visit allowed the Bahraini business delegation to explore unique ways of educating an innovation-focused generation, following the directives of the government of Bahrain towards a digital transformation in line with a knowledge-based economy.

Ḗcole 42, launched in 2016, constitutes a case study of a pioneering non-profit educational institution that offers tuition-free learning. It has earned the respect of a number of influential people in the technology space, including innovators from Silicon Valley, such as Evan Spiegel, co-founder of Snapchat, and Jack Dorsey, co-founder of Twitter. The college welcomes applicants from all backgrounds, ages, and educational levels, and the selection process is completed digitally.

During the official visit to France, 12 agreements and memoranda of understanding with French companies were signed, amounting to US$2 billion. The agreements are aimed at boosting bilateral economic relations and co-investment across numerous sectors.

Many years ago I unfortunately had the habit of smoking. Actually I was not a chain smoker, but would enjoy five or six cigarettes...
Read more
Inside Bahrain

With the current situation at hand & in line with its commitment to protect its employees and the public, the Information & eGovernment Authority...
Sports This Week

Huawei offers users an extended warranty on a range of products. This as a precautionary measure based on recent public health and prevention considerations....
iGA

If you’re looking to renew your ID card or need other services related to it, remember that there’s no need to invest time and...
iGA

In line with ongoing efforts to prevent the spread of the Coronavirus (COVID-19), the Ministry of Health today announced it has started conducting field...
Tech

Batelco is pleased to announce the introduction of same-day Home Delivery service starting from Thursday 26-March, to support the community during the current period...
Inside Bahrain

BRAVE Combat Federation, the biggest sports property in the history of Bahrain, has launched an awareness campaign to combat the spread of Coronavirus worldwide,...
Tech