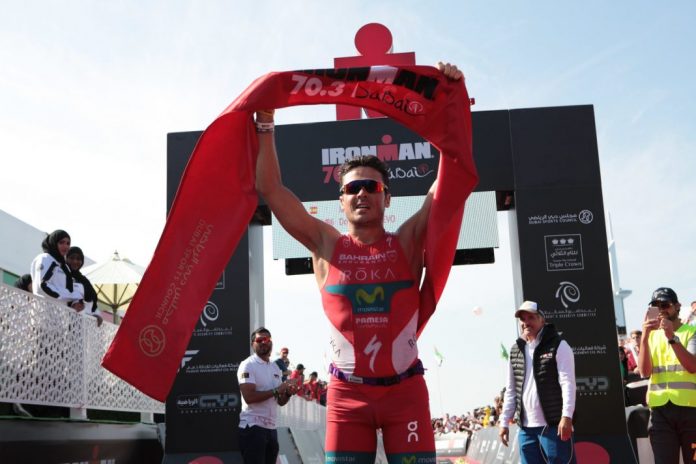 The Bahrain Endurance 13 team racked up the hardware this weekend with a sweep of the top spots at Ironman 70.3 Dubai and a podium and an unprecedented streak at Ironman 70.3 South Africa.

His Highness Shaikh Nasser Bin Hamad Al Khalifa finished first among Gulf athletes and fifth in his age group, setting a new Bahrain national record for the half distance at 4:15.

While Ryf did not lead out of the 1.9 kilometer swim at Jumeirah Beach, she took the front on the bike at kilometer 22 and never looked back. Not content with leading, halfway through the 90-kilometer cycle into the desert dunes she dropped the hammer, riding past a few of the male pros. Only two other women came with her: one eventually finished second while the other faded to eighth. On the 21-kilometer run Ryf established her mastery, breaking the tape three minutes ahead of everyone else.

Gomez paced himself throughout the swim and bike. Second out of the water, he finished the cycle in ninth place about three minutes back, but immediately went to work on the run. After passing all the frontrunners at kilometer 14, he kept up the pace and extended that lead into the finish by almost two minutes.

This was Gomez’s his first major outing since a broken elbow took him out of Olympic competition last year. He said, “Happy to win 70.3 Dubai today. I struggled a lot on this very flat course two years ago, so I decided to come back, face my weaknesses and try to do better. Thanks everyone for the support, not only at this race but during the last tough few months. And congrats to the guys on the podium, they made me dig very deep to win this one!”

The two athletes are now eligible for a run at the million-dollar prize money awarded to any athlete that wins each leg of the Nasser Bin Hamad Triple Crown series. The next two legs will take place at the Ironman 70.3 World Championship and Ironman 70.3 Bahrain. Ryf won the triple crown in 2015, making her the world’s top prize-winning triathlete, male or female.

Meanwhile in South Africa, it was a big payday in the Cunnama household today with Jodie Cunnama claiming her seventh consecutive title and James Cunnama chasing down all but one for a runner-up finish at Ironman 70.3 South Africa.

The defending champion stormed the swim, leaving all others in her wake with nearly a three-minute lead. She then grew that to six minutes after the bike and held on to finish in 4:39:48 with a clear one-minute advantage.

James came out of the water in the top 10 and crept into third place by the end of the bike leg. His blistering run nudged him up one more spot on the podium before he ran out of real estate in 4:11:26.

Jodie said, “Glad to come away with number 7 at #IM703SA after a drama-free day. James was second and was waiting for me in the finish line with a big grin. Well-done to Susie Cheetham and Jerzyk Agnieszka for keeping me honest all day.

“I felt such pressure going into this race because it is so early in the season and anything other than a win is going to be a disappointment for me. It’s difficult – but I guess nothing worth doing is easy.”