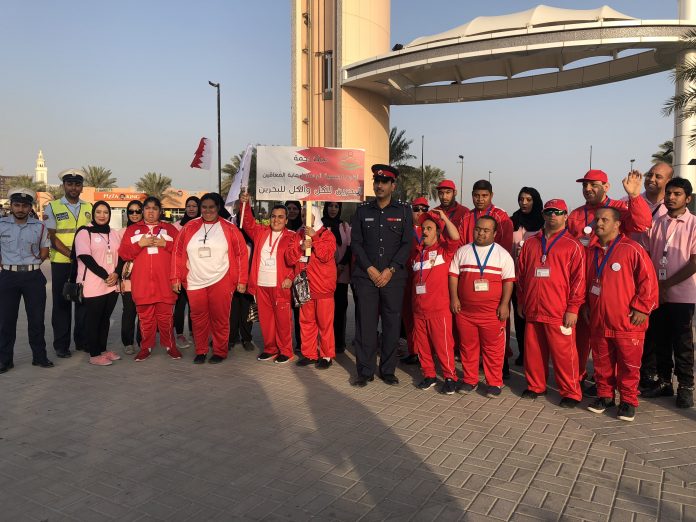 “Bahrain for All, All for Bahrain Festival” Receives Universal Applause!

“Bahrain for all, all for Bahrain Festival” was held for the seventh time on March 30th, 2018 at the Prince Khalifa bin Salman Park in Hidd, in the presence of more than 55,000 Bahrainis and residents.

More than 45 embassies, foreign communities, social clubs and community associations, civil society organisations, women’s associations, special needs as well as 16 departments from the Ministry of the Interior took part in the festivals’ activities.

The event, which was organized by the events company Consultnivs, founded by Ms. Nivedita Dhadphale  and held under the theme of “Unity in Diversity”, featured a series of performances by Bahraini and non-Bahraini folklore groups from Oman, Jordan, Egypt, Morocco, Palestine, India, Pakistan, Sri Lanka, Philippines, Jordan, Thailand, Bangladesh, Nepal, Ethiopia and others. More than 250 booths were dedicated to the sale of Bahraini companies’ products and productive families to display their products that attract the attention of so many attendees and embody the popular culture of the Bahraini people in the fields of clothing, food, baskets, pottery and others. Traditional dishes of the participating countries were also introduced.

A special tent to showcase the products of the productive families was organised by the Bahrain Authority for Culture and Antiquities (BACA). It was characterised by its heritage, design and interior decoration. Kids were also given special attention at the event, as they enjoyed playing many of their favourite games and practised their hobbies in drawing and colouring, and interacted greatly with the technical presentations by the participating teams.

“We were delighted that so many Bahraini entrepreneurs participated and over twelve special centres attended. It was remarkable to see adults and children of all abilities and nationality move around the park with ease and interact with each other. For motorbike fans, thanks to Hasan Habib the HOGS Bahrain Chapter with the Bahrain riders visited and invited kids to sit on their bikes and toured the stands.” Nivedita Dhadphale commented

H.E Taha Abdul Qader, Ambassador of the State of Palestine to Bahrain, expressed his happiness for the participation of the Embassy and members of the Palestinian community in the event for the sixth time under the patronage of His Royal Highness Prince Khalifa bin Salman Al Khalifa, affirming that the Kingdom of Bahrain and its leadership support many activities and achievements that promote rapprochement and mutual respect among the communities.

Ambassador of Indonesia, H.E Mr. NurSyahrir Rahardjo expressed his hope that through this event, the audiences can be more familiar with other’s culture, so that the existing relations between countries, communities, people and both countries could be strengthened and deepened further.

H.E Alfonso A. Ver, the Philippine Ambassador to Bahrain lauded the event, saying that on its third year, the “Bahrain for All” is getting bigger and better. He said that the event is a unique celebration of unity in diversity for all peoples in the Kingdom.

She said Bahrain has always been known for its religious and cultural diversity over the years, where all residents and citizens coexisted in peace, respect, cooperation and harmony under the leadership of His Majesty King Hamad bin Isa Al Khalifa, and the special support of HRH the Prime Minister and the encouragement of His Royal Highness Prince Salman bin Hamad Al Khalifa, the Crown Prince, Deputy Supreme Commander and First Deputy Premier, through the implementation of the Reform Project spearheaded by HM the King.

She pointed out that the “Bahrain for all and all of Bahrain” annual event was embodiment of the reform project and reflects the reality of the Bahraini society in all its different cultures, sects and categories.

A number of citizens who attended the ceremony expressed their sincere thanks and appreciation to His Royal Highness the Prime Minister for his tireless efforts to achieve the aspirations of the citizens and the attention he gives to all that would enhance the atmosphere of coexistence and solidarity enjoyed by Bahrain, stressing that the celebration embodies what he is doing in terms of achieving cohesion among all who live on the land of Bahrain.

In this context, Mr. Mohammed Zaki Mahjoub Bu Shehab, representative of the Bahrain-Sudanese Cultural and Friendship Society of Nawres in the Kingdom of Bahrain (under formation), stressed that they were keen to participate in this celebration because of its importance in achieving communication and rapprochement.

“From the land of the Nile, we send greetings to Bahrain, and we are delighted that our culture and cultural heritage will converge.” he said, adding that “Bahrain is a pearl that everyone looks forward to.”.

The Thai club in Bahrain for affirmed in a statement that it has for decades been actively involved with other communities in the events and celebrations held in Bahrain.

“Thai Community in Bahrain actively joins hand in hand with other communities and the local in the events and activities for decades. The Thai Club and all the members
of the Thai community in Bahrain have strong commitment to strengthening the community to be able to efficiently promote Thailand-Bahrain relationship as well as to contribute to the harmonious society as well as progress and development of Bahrain’ the statement said.

The Shri Krishna Hindu Temple also noted in a statement Bahrain’s long history of hospitality and tolerance for other religions.

“The Kingdom of Bahrain has a long tradition of warm hospitality and tolerance towards other faiths. The multi-faith expatriate community taking part in the Kingdom’s development has always been granted religious freedom to follow their individual rites of worship, it said.

“We extend our deep gratitude to HM the King, HRH Premier and HRH Crown Prince, as well as to the government and people of Bahrain, who have extended complete support to all our activities and allowed us to practice our faith freely,” the statement added.

Tremendous preparations are being made to launch the first-of-its-kind Brand and Design Forum in the kingdom of Bahrain. The forum, which is organized by...
© GO ALIVE MEDIA
MORE STORIES