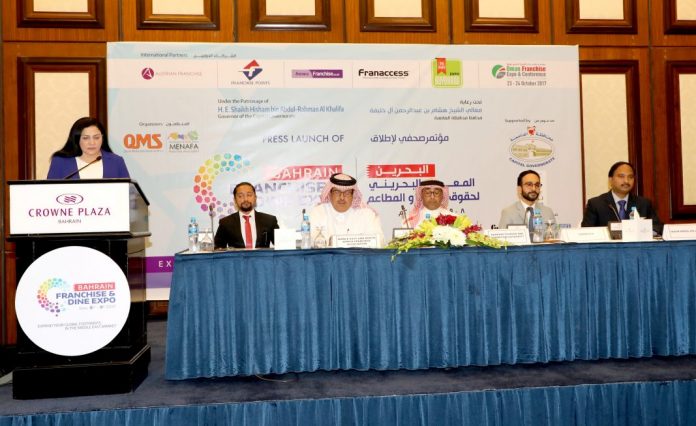 Under the patronage of H.E. Sh. Hisham bin Abdul-Rahman Al-Khalifa, Governor of the Capital Governorate, the first Franchise & Dine Expo in the Kingdom of Bahrain, which is set to take place on 8th & 9th November 2017, was launched in the presence and participation of a number of government organisations, NGOs and local media.

In a special press launch, with the support of the Capital Governorate, Bahrain Tourism & Exhibition Authority (BTEA), and Tamkeen as the official strategic partner, and the presence of officials from BCCI and professional NGOs such as Bahrain businesswomen Society (BBS), the SMEs Society, and the media, Co-organisers; Quick Media Solutions Company W.L.L (QMS) and the Middle East and North Africa Franchise Association (MENAFA) launched the first edition of Bahrain Franchise and Dine Expo 2017 in the Kingdom of Bahrain. The press launch was held at Bahrain Conference Centre – Crowne Plaza Bahrain. The Expo was launched under the compelling theme “Expand Your Global Footprints in the Middle East Market”.

The launch started with a welcoming address and the patron’s opening speech delivered by H.E. Mr. Hassan Abdulla Al-Madani, Deputy Governor of the Capital Governorate, deputizing the patron, H.E. Sh. Hisham bin Abdul-Rahman Al-Khalifa, Governor of the Capital Governorate. Mr. Al-Madani conveyed the governor’s greetings and warm wishes for the organizers, partners, supporters, exhibitors and all participants to succeed in their endeavours to achieve the goals set for this event. Mr. Madani also emphasized that the expo patronized by the Capital Governor and supported by the Capital Governorate is in line with the governorate’s objectives in offering a business platform for small and medium size enterprises to explore various opportunities and new business prospects at the local, regional and global levels, and attract many experiences from different sectors such as education, training, food, health, business and others.

Mr. Madani concluded by saying: “On this occasion, I would like to take the opportunity to thank the organisers for honouring the Governorate with the patronage of this event. I would also like to thank the supporters and all the participants, wishing you all the success in this event and hope for this event to achieve its long and short term objectives in its endeavour to serve entrepreneurs, namely, the young entrepreneurs.”

On behalf of Tamkeen, the event’s official strategic partner, Mr. Esam Hammad, Senior Manager, Enterprise & Advisory Relations from the Customer Engagement & Support Department, spoke about the support that Tamkeen provides to many Bahraini enterprises, namely SMEs, to grow and develop, and the opportunities envisioned in the forthcoming event where different enterprises including SMEs will be participating and benefiting from the expo and what it has to offer that will help them to further develop their businesses, and venture into the world of franchise and access new markets.

Dr. Khalid Al-Sharafa, Founder & Chairman of the Middle East & North Africa Frachise Association (MENAFA) and Co-Organizer of the expo, started his speech by saying: “Bahrain Franchise & Dine Expo 2017 will be the first edition of upcoming franchise events in the Kingdom of Bahrain. The franchise industry is one of the primes worth approximately $30 billion growing at a rate of 27% annually in the MENA region.”

He also said: “Our aim is in line with the Government of Bahrain’s goals to promote growth and expansion regionally and globally for investors to explore their options in Bahrain, and great concepts to expand globally, and we hope this first franchise expo in Bahrain will bring under one roof leading global and homegrown franchisors to meet and connect. This will be a premier business event, attracting the most successful brands and service providers with the aim of networking with investors.”

Mr. Jacob Jijo Philip, Business Development Manager at QMS and Expo Organizing Committee Member delivered a speech on behalf of Co-Organizer, Quick Media Solutions Co. W.L.L. (QMS). Mr. Philip outlined the ideology of the expo saying: “Franchising is the current trend for business opportunities, which is growing at a very fast pace in the world of business. Franchising has made its trademark in the global market for business expansion, Start-ups, Enterprises, Entrepreneurs and Economic Development. Now I believe it’s time to take Franchising at a larger scale in the Kingdom of Bahrain which will also deliver the same impact and I am very sure Bahrain is very much ready for it.” Mr. Philip also highlighted the vision, mission, objectives and anticipated gains from the expo.

Mr. Philip also stressed: “This expo is acquiring great interest and attention from international brands and international partners because they are very much aware of the fact that the Kingdom of Bahrain is growing economically and is open to a wide range of business expansions in the region.” Mr. Philip also emphasized that “Bahrain economy is one of the most diversified economies in the region and it keeps developing and expanding constantly. The business market here is flexible and provides the most competitive environment for entrepreneurs and start-ups.”

One of the expo’s already on board exhibitors, Mr. Yajur Damani, Director of Komandor Middle East – Bahrain, a leading worldwide producer of wardrobe systems since 1992, was invited on the podium as a representative of this franchiser in Bahrain to talk about his company’s objectives to be part of this expo. Mr. Damani said that the company found participating in this expo a great opportunity to showcase its products and services and to expand its business in the region and globally, therefore, he focused on issues of expansion and globalization.

As part of the launch, the organizers planned a curtain raising ceremony, whereby Deputy Governer , Mr. Hassan Al-Madani and Mr. Hesham Alsakan, Director of Tourism Facilities & Services, Bahrain Tourism & Exhibition Authority (BTEA) Deputizing the CEO, H.E. Shaikh Khalid bin Humood Al-Khalifa, pulled the curtains on the official Expo logo announcing the official launch of Bahrain Franchise & Dine Expo 2017. Following the launch, the organizers presented each of the patron, Chief Guest and Tamkeen with a momento as a token of appreciation for their participation in the launch and their continuous support.

At the end of the launch ceremony, Dr. Khalid thanked the Capital Governorate and Bahrain Tourism & Exhibition Authority for their support to launch the first edition of Bahrain Franchise and Dine Expo in the Kingdom of Bahrain, under the patronage of H.E. Sh. Hisham bin Abdulrahman AlKhalifa, the strategic partnership of Tamkeen, and all the public and private sector organizations in Bahrain that supported the launch. That said, Dr. Khalid invited all enterprises & SMEs to join this expo, take advantage of this opportunity, and register now.

The Launch highlighted the great business prospects, training, networking and opportunities to exhibit the participating enterprises’ different products and services, with great emphasis on businesses, namely SMEs planning to explore, access and invest in the Franchise and Dine Sectors. It is expected that the Expo will bring under one roof leading global and homegrown franchisors to facilitate investors with analyzing franchise agreements and evaluating opportunities that can minimize risks and can fit well into existing Business operations.