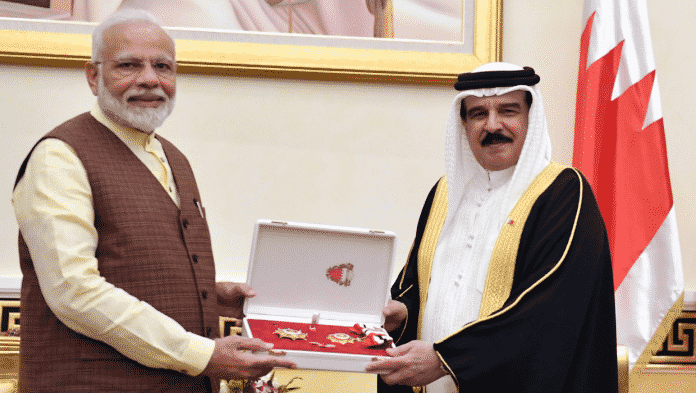 His Majesty King Hamad bin Isa Al Khalifa, estowed Bahrain Order – First Class on His Excellency Shri Narendra Modi, Prime Minister of the Republic India in recognition of his efforts to strengthen bilateral relations with the Kingdom of Bahrain. 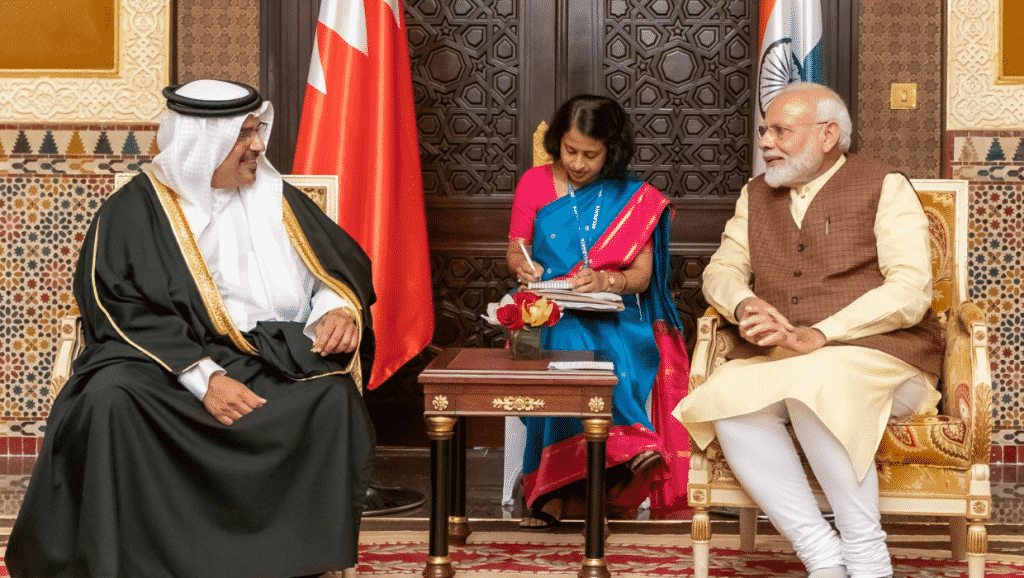 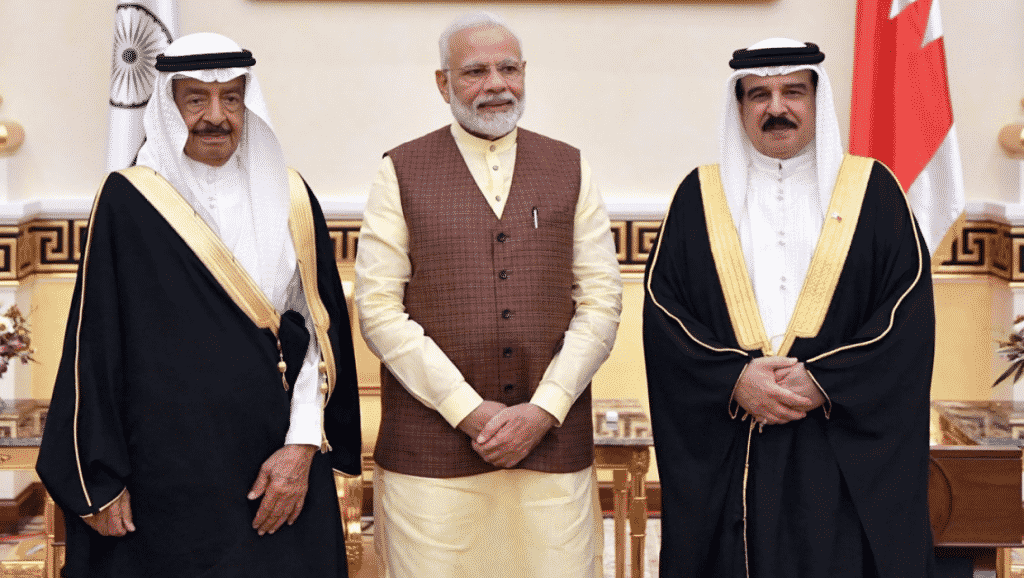 The visit of Prime Minister Modi to Bahrain is the first ever visit by an Indian Prime Minister. It was a historical and important milestone in the long-standing brotherly ties and bilateral cooperation between the two countries, founded on close historical bonds, shared principles, mutual interests as well as common aspiration for international peace, stability and prosperity. 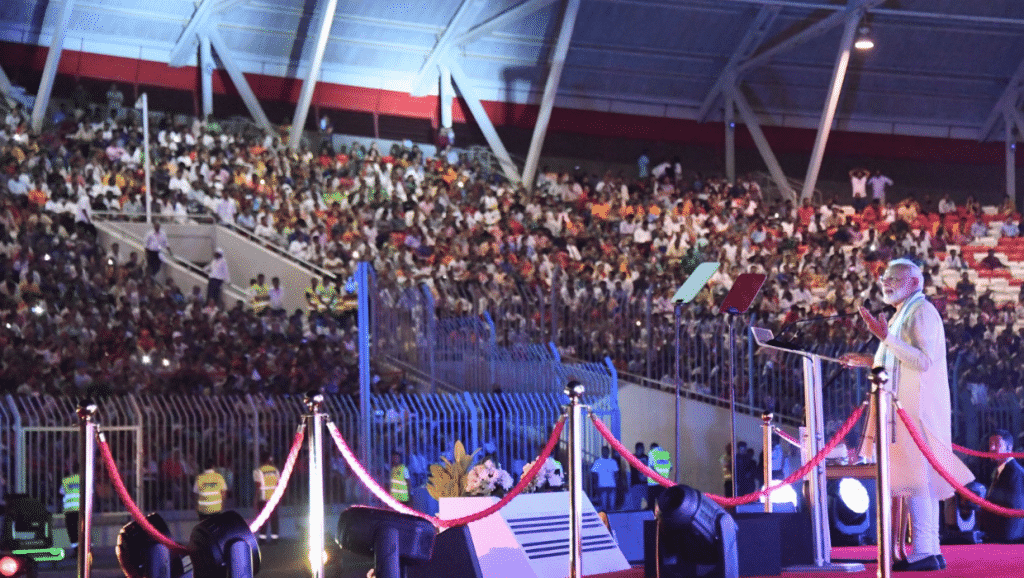 HM the King held a meeting with Prime Minister Modi, and reviewed deep-rooted historic relations of friendship binding the Kingdom of Bahrain and the Republic of India. They highlighted aspects of joint cooperation in the investment, economic, commercial, health, scientific and technological sectors, in adding to the sector of energy. They also hailed steadily-growing bilateral relations, stressing resolve to pursue efforts to expand joint cooperation in vital sectors, benefit from expertise and investment opportunities and potential in both countries as part of their common strategic interests.

The following MoUs were signed during the visit:

i. Cultural Exchange Programme between India and Bahrain

ii.  Statement of Intent on the collaboration between ISRO and NSSA in the area of Space Technology

iii.  Statement of Intent on the collaboration of Bahrain with ISA

iv.  Memorandum of Understanding between BENEFIT and NPCI for Launch of “RuPay Card’ in Bahrain

The Indian side welcomed the interest of the Kingdom of Bahrain to join the International Solar alliance (ISA), recognising the importance of it as international intergovernmental organisation, which has become an effective platform to facilitate the deployment of solar energy.

Both sides reaffirmed their condemnation of terrorism in all its forms and manifestations, regardless of the identity of the perpetrators and their motives, and they agreed to further enhance cooperation in the field of security, counter-terrorism and the exchange of intelligence and information. The two sides also exchanged views on regional and international issues of mutual interest.

The two sides also noted the need for concerted action by the international community against terrorism including through early adoption of the UN Comprehensive Convention on International Terrorism and underlined the importance of comprehensive sanctioning of terrorists and their organizations by the UN.

Expressing satisfaction on their ongoing bilateral cooperation in the area of security, two sides welcomed the ‘Security Dialogue’ meetings at regular intervals, at the level of Deputy National Security Advisors. The two sides discussed ways and means to further promote cooperation in cyber security, including prevention of use of cyber space for terrorism, radicalization and for disturbing social harmony. Both sides called on all states to reject the use of terrorism against other countries; dismantle terrorism infrastructures where they happen to exist and to cut off any kind of support and financing to the terrorists.

The two sides agreed to focus on enhancing cooperation in energy, covering the areas of joint exploration and training of human resources.  Prime Minister congratulated Bahrain on the recent discovery of huge oil and Gas reserves. The Indian side highlighted the interest of its energy companies to pursue opportunities of conventional exploration as well as development of newly discovered oil and gas assets in Bahrain.

The two leaders agreed to enhance cooperation to strengthen maritime security in the Gulf region, vital for the security and safety of sea lanes.

Both sides emphasized on the urgent need to pursue UN reforms, including the Security Council through an expansion of both categories of its membership, to make it more representative and effective in tackling global challenges.

Both sides reaffirmed their commitment towards reformed multilateralism and underlined the need to strengthen and reform multilateral system and institutions to address the aspirations of the developing countries.

With regards to regional connectivity projects, both sides agreed that they should be based on international law including respect for sovereignty and territorial integrity of states.

Both the leaders reaffirmed the commitment to pluralism, values of tolerance, peaceful coexistence and religious freedom.

His Excellency Shri Narendra Modi, later addressed more than 18,000 members of the Indian diaspora at the Bahrain National Stadium, Mr. Modi said his heart was filled with happiness when he heard words of praise about the Indian diaspora’s contributions in the Gulf country.

Gulf Air, the national carrier of the Kingdom of Bahrain, is proudly announcing that it will resume its direct Abu Dhabi and Dubai flights...
© GO ALIVE MEDIA
MORE STORIES