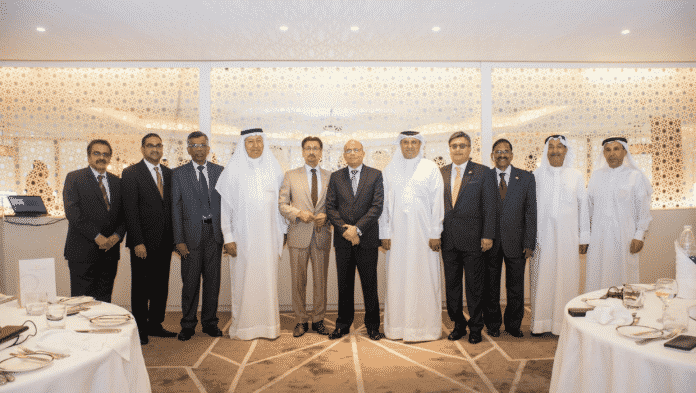 BDB, Bahrain Development Bank reveals the total amount of cumulative financing done by bank is BD 592 million since it commenced operations in 1992.

Last year alone, a total of 2695 enterprises benefitted from the bank’s development services, said BDB’s CEO Sanjeev Paul. Speaking at a luncheon seminar organized by the Bahrain India Society (BIS) at the Capital Club, he revealed that the bank’s contribution to funding small and medium enterprises (SMEs) has helped in creating more than 3,000 jobs since the start of 2018.

At the seminar, Mr Paul talked about various shifts taking over the market and how the kingdom could benefit from capitalizing on these changes. He began the talk  by highlighting the achievements the kingdom of Bahrain had made . He stated that Bahrain was ahead of the MENA average on most of the parameters . Bahrain had already begun building an ecosystem to support entrepreneurs and that its institutions such as Tamkeen, EDB and BDB had  played a critical role  in furthering development and progress.

The seminar ended on a positive note where the CEO shared numerous success stories along with statistics that showed a rise of expectant jobs, additional value, cumulative financing and development service beneficiaries.

BIS Chairman Raj Damani welcomed the speaker and the gathering , and director Vijay Boloor proposed a vote of thanks. Treasurer P S Balasubramaniam introduced the speaker.

The General Directorate of Traffic announced that the services that required personal attendance would be processed after booking appointments through the Skiplino smartphone application...
Read more
PR This Week

The National Bank of Bahrain (NBB) has announced that it is has extended its support to its Commercial and SME customers impacted by the...
Read more

The Supreme Council for Women (SCW) has today started field work as part of the “Together for Bahrain's Safety" which was launched recently. Basic commodities...
Read more
PR This Week

Our Al Adil group has always focused on delivering pure, clean and safe products to customers. Hence we have implemented state-of-the-art technology for packaging,...
Sports This Week

The National Taskforce for Combating the Coronavirus (COVID-19) held a press conference at the Crown Prince Centre for Training and Medical Research to highlight...
iGA

The National Bank of Bahrain (NBB) has announced that it is has extended its support to its Commercial and SME customers impacted by the...
Inside Bahrain

A total of 1100 meals have been distributed to expatriate workers in the Capital Governorate. The initiative is part of a charity campaign amid precautionary...
© GO ALIVE MEDIA
MORE STORIES