I tried to do my homework but a...
CultureInside BahrainBahrain, Israel sign historic Joint Communique on the Establishment of Diplomatic, Peaceful and Friendly Relations 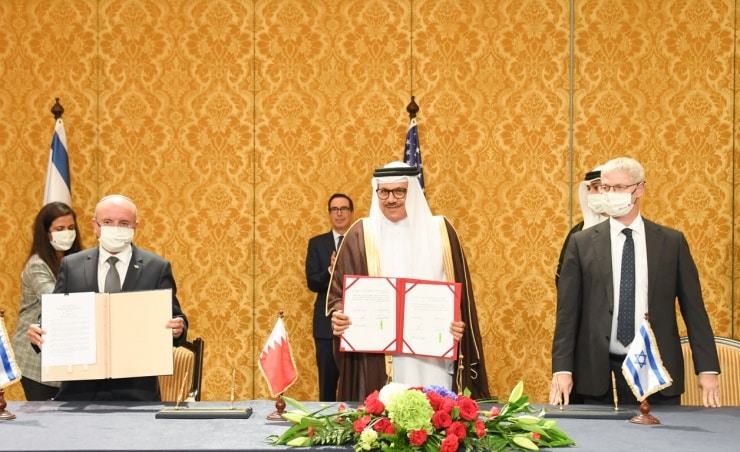 Delegations from the Kingdom of Bahrain, the United States of America and the State of Israel met in Manama.

Bahrain and Israel signed a historic Joint Communique on the Establishment of Diplomatic, Peaceful and Friendly Relations, marking the new and promising era in their relationship.

Memorandums of Understanding regarding economic and trade relations, telecommunications, commerce, air services, movement of people, banking and financial services, and cooperation between Ministries of Foreign Affairs, as well as other areas of mutual benefit were signed between the Kingdom of Bahrain and the State of Israel.

In addition, working groups met to discuss a wide range of additional areas for potential cooperation, including aviation, healthcare, technology, tourism, and agriculture, and to plan of their bilateral relationship.

This historic diplomatic breakthrough has been facilitated by the Abraham Accords initiative of President Donald J. Trump of the United States of America.

It follows the 11 September 2020 agreement between the Kingdom of Bahrain, and the State of Israel, to open an era of cooperation between the two nations. This diplomatic step was followed by the signing of the Peace Declaration between both countries in Washington on 15 September 2020, to endorse the principles of the Abraham Accords and to open a new chapter of peace.

This chapter is a continuation of determined regional and international efforts to advance peace in the Middle East and is testament to the bold vision and leadership exhibited by the three countries to innovate in diplomacy for sustainable peace and prosperity. The three countries face a range of interdependent challenges and will mutually benefit from today’s historic milestone.

Today’s historic signing brings together two of America’s friends and partners in the Middle East.

The Kingdom of Bahrain and the State of Israel will join with the United States to advance a Strategic Agenda for peace and prosperity in the Middle East and expand avenues for cooperation that are anchored within shared values and interests.

The three nations are aligned in their views on the challenges, threats and opportunities present in the region. Through closer security cooperation, public diplomacy and engagement on the economy, technology, and other shared interests, including the promotion of co-existence, people-to-people engagement and a culture of peace, the region’s potential can be unlocked. Today’s agreements will lead to better lives for the peoples of Bahrain and Israel.

The parties will continue their efforts to achieve a just, comprehensive, and enduring resolution to the Israeli-Palestinian conflict.

The Kingdom of Bahrain and the State of Israel trust that this development will contribute to a future in which all peoples and all faiths can live together in the spirit of cooperation and enjoy peace and prosperity where states are focused on shared interests and building a better future.

The Kingdom of Bahrain and the State of Israel express their deep appreciation to the United States of America in securing a more stable, secure, and prosperous Middle East.