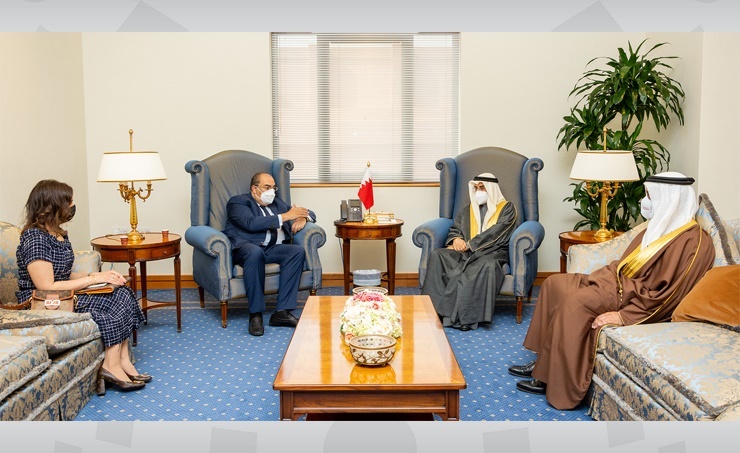 Deputy Prime Minister and Chairman of the Ministerial Committee for Financial and Economic Affairs and Fiscal Balance, Shaikh Khalid bin Abdulla Al Khalifa, has affirmed that the kingdom, under the leadership of His Majesty King Hamad bin Isa Al Khalifa, and thanks to the follow-up of His Royal Highness Prince Salman bin Hamad Al Khalifa, the Crown Prince and Prime Minister, is keen to strengthen its relations and cooperation with UN institutions and agencies, particularly the International Monetary Fund (IMF), to mitigate the impacts created by the novel Coronavirus pandemic.

He asserted that Bahrain, while implementing the initiatives and priorities of its Economic Recovery Plan, is always keen to create promising job opportunities for citizens, accelerate the pace of growth by facilitating procedures and developing promising sectors to enable them to continue to contribute effectively and positively to the GDP, as well as stimulate the economic environment through major development projects by investing in the important and leading position of the Kingdom as a centre for doing business and activities.

Shaikh Khalid bin Abdulla made the statements while receiving at the Gudaibiya Palace today, in the presence of Finance and National Economy Minister, Shaikh Salman bin Khalifa Al Khalifa, the Executive Director of the Arab Group at IMF, Dr. Mahmoud Mohieldin, who is currently on a visit to the kingdom.

The Deputy Premier welcomed Dr. Mahmoud Mohieldin, and wished him every success in his new post which reflects IMF’s confidence in his ability to support Arab countries in their efforts to achieve their economic goals and boost their growth opportunities.

Dr. Mahmoud Mohieldin expressed thanks and appreciation to the Deputy Prime Minister for the warm welcome, commending the steps taken by the kingdom to provide health and social protection for the citizens and the residents during the exceptional circumstances created by the pandemic all over the world.

He indicated that the Kingdom’s launch of the Economic Recovery Plan reflects its forward-looking vision, and ability to adapt to various changes, wishing Bahrain continued progress and prosperity.