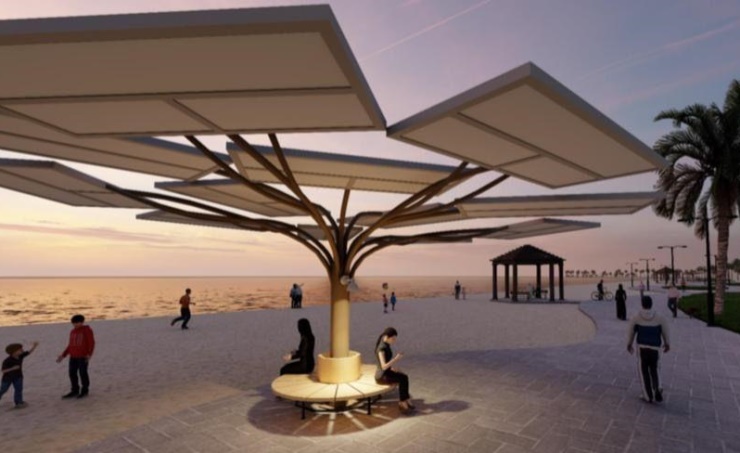 In a first for Bahrain, the National Initiative for Agricultural Development (NIAD) has launched the Solar Energy Trees project.

The project, in cooperation with the Southern Municipality and with generous support from BBK, aims to develop the Askar coast while using renewable energy to reduce waste and consumption and create a clean sustainable environment in line with the Kingdom Vision 2030.

The Askar Coast development project is within the Kingdom’s general environmental orientation, under the directives of His Majesty King Hamad bin Isa Al Khalifa and is a reflection of the interest of the government, headed by His Royal Highness Prince Salman bin Hamad Al Khalifa, the Crown Prince and Prime Minister in protecting the environment locally, regionally and internationally.

The project features the construction of structures resembling trees that generate solar energy using photovoltaic (PV) panels. The energy is also used for the irrigation network and the electricity consumption is reduced by around 20%.

The old lighting will be replaced with energy-saving lamps, making the coast the first walkway in Bahrain that features an integrated environmental system, thanks to the full support of the BBK and the good work of the Southern Municipality.

He hailed the constructive cooperation between the BBK, NIAD led by its Secretary-General Shaikha Maram bint Isa Al Khalifa, and the Southern Municipality in developing the Askar Coast and providing it with alternative and environmentally friendly energy.

The coast is the first coastal environmental project to be developed by providing it with an advanced solar-powered irrigation system, and equipping it with suitable and shaded sitting areas for its visitors, he added.

Saif stressed the role of BBK in supporting such development initiatives and its strategies to consolidate community partnership and sustainable development.

Southern Municipality Director-General Asim Abdullatif Abdullah expressed his thanks and appreciation to NIAD for its interest in making Bahrain’s areas and streets green, and encouraging it to adopt initiatives that contribute to preserving the environment in public facilities, including the use of clean energy, such as solar energy, to provide lighting in gardens, walkways and service facilities.

He also commended the role of BBK in promoting community partnership and its support for the first phase of the development of the Askar Coast to turn into an environmental walkway that reduces consumption and creates a sustainable environment, with solar energy trees.

The first project of its kind in the Kingdom will contribute significantly to reducing electrical energy consumption and preserving the environment, he said.

Shaikha Maram said that “the efforts made by the National Initiative today in supporting and promoting the preservation of the environment and its sustainability and the development of its agricultural resources for future generations are the result of the directives of HRH Princess Sabeeka bint Ibrahim Al Khalifa, wife of HM the King, Chairperson of the Advisory Council for NIAD.

HRH’s directives have been steadily supporting and guiding all national institutions in the public, private and civil sectors, and activating contributions to build them into tangible reality that enhances government work and preserves the agricultural and environmental sectors, she added.

“The Askar Coast Development Project is the first project of its kind in the Kingdom of Bahrain through the development and innovation of a modern environmental mechanism under the “Solar Energy Trees,” Shaikha Maram said.

“These trees, through their solar panels, use renewable energy and cover the coast’s electricity needs, which contributes to reducing government expenditures and at the same time enhance environmental sustainability.”

They are in line with the government’s vision to enhance innovation in various fields, the most important of which is the agricultural and environmental field, enhance the values of green environment and sustainable development, and encourage the use of environmentally friendly technologies, she added.

Shaikha Maram lauded the great role of the BBK thanks to its continuous contributions to supporting all environmental initiatives that serve Bahrain and enhancing the community partnership with the public sector for a common agricultural and environmental goal.