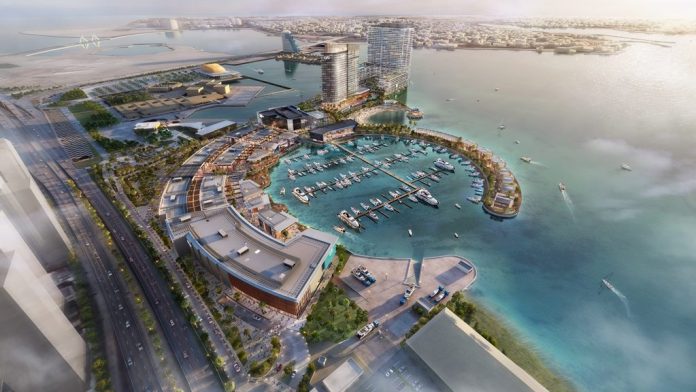 Bahrain Marina Development Company, a wholly-owned subsidiary of the Social Insurance Organization (SIO), announced that the progress of the ‘Marine Works’ phase of the project is in accordance to the proposed timeline set.

The ‘Marine Works’ stage was the first stage of the project and included all the enabling and marine-related works, including silt removal, earthworks, shore protection, quay walls and culvert crossings in preparation for the construction stage of the project.

Aiming for Phase I completion by 2020; the planned development stretches along a pristine coastline in Manama and will comprise of state-of-the-art residential, entertainment, leisure and marina facilities.

“We are pleased to announce the progress of the project based on the timeframe set by the management. During the Marine Works phase of the project, we were adamant about protecting the marine life in order to ensure long-term sustainability. Our marine protection strategy was developed in cooperation with the Supreme Council for Environment,” said the Chairman of Bahrain Marina Development Company Mr. Abdulrahman Yusuf Bin Yusuf Fakhro.

“The next phase of the project which is the piling work is scheduled for December 2017,” he added.

Further commenting on the key milestone, Chief Executive Officer of Bahrain Marina Development Company, Eng. Yazan Kamal Haddad said: “We are proud of our solid progress in line with the timeline developed by the team, further stressing our commitment towards launching the project in a timely manner.”

“I would like to take this opportunity to extend my gratitude to all involved in the development and progress of this iconic development especially the Ministry of Works, Municipalities Affairs & Urban Planning, the Electricity & Water Authority and the Bahrain Marina engineering team for their continuous efforts and dedication to complete this phase of the project.” he added.

“Once launched, Bahrain Marina project will play an integral role in strengthening the national economy. This national landmark will also create job opportunities for Bahrainis and drive the growth of the retail and leisure industries in the Kingdom,” said Haddad.

‘Bahrain Marina’, dubbed as an iconic world-class facility, stretches along a pristine coastline in the heart of Manama and will be positioned as the Kingdom’s prime lifestyle and leisure destination. Aiming for Phase I completion by 2020; the mix-use development will include a five-star lifestyle hotel, serviced and freehold apartments, waterfront villas along with a shopping mall, fully-integrated family entertainment centre and a recreational waterfront space with dining and retail spaces. A yacht club will be built covering an impressive area with the capacity of berthing a vast number of boats of different sizes.