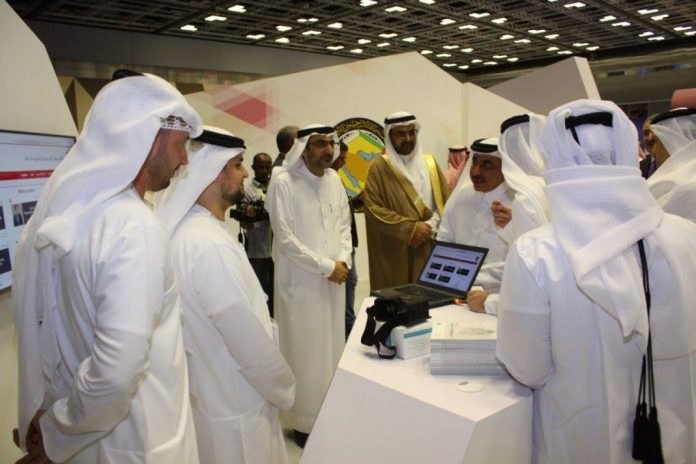 Represented by the Information & eGovernment Authority (iGA), the Kingdom of Bahrain participated in the 4th Qatar’s Information & Communication Technology Exhibition and Conference (QITCOM) 2017 under the title ‘Qatar Towards a Smart Future’. Held from 6th – 8th March, under the patronage of H.H. Emir Shaikh Tamim bin Hamad AlThani, the event brought together a wide participation of local and international speakers as well as major players within the IT sector.

Information & eGovernment Authority CE Mr. Mohammed Ali AlQaed took part in one of the second day’s plenary sessions on ‘Smart Governments Leading the World of Tomorrow’. The most prominent discussion the Chief Executive highlighted was the GCC’s joint efforts exerted to develop the ICT and eGovernment sectors, their initiatives towards the digital government transformation, alongside the challenges and the mechanism to overcome them. He also addressed what the governments’ aspire in order to reach smart government.

On such occasion, AlQaed indicated the Kingdom of Bahrain’s efforts in delivering hundreds of online services across diversified channels; whether on the internet or via smart devices in an easy, simplified manner benefiting all users – citizens, residents and businessmen.

During the Discussion Session, iGA Chief Executive presented the Kingdom’s experience in the field of digital transformation through examples such as the National Suggestions and Complaints System ‘Tawasul’ and the ‘Zajel’ system. He continued by presenting a glimpse of the most important features of the eKey system in addition to the interactive eMeeting++ system.

The Information & eGovernment Authority also participated in the accompanied exhibition of QITCOM to showcase its key eServices and projects that benefit the region; some of which include the eMeeting++ system and the commercial license issuance system ‘Sijilat’ which provide comprehensive services to issue commercial registrations in the Kingdom. Other projects comprised Tawasul, launched recently by the authority as an application.

Moreover, iGA’s delivered eServices, which exceeded 350, were also highlighted. Another exhibited venture was the Cloud Computing Project which contribute in offering high-capacity storage of data, reducing costs as well as providing work within the framework of a safe, protected environment. The authority also presented, at its stand, the Cyber Trust Programme targeted to employees of the IT sector in the government so as to enhance users’ awareness and spread the right practices to work in a safe environment.

Most of us, to achieve any goal are advised to have self-control and self-discipline. For instance stop eating carbs, ground yourself to study. These...
Read more
PR This Week

Most of us, to achieve any goal are advised to have self-control and self-discipline. For instance stop eating carbs, ground yourself to study. These...
Tech

Gulf Air, the national carrier of the Kingdom of Bahrain, has signed a Memorandum of Understanding (MoU) with Ras Al Khaimah International Airport (RAK...
PR This Week

The National Health Regulatory Authority has approved the emergency use of Covishield, the Covid-19 vaccine produced by AstraZeneka in cooperation with the University of...
PR This Week

His Majesty King Hamad bin Isa Al-Khalifa sent a cable of congratulations to the President of the United States of America Joe Biden on...
PR This Week

To continue expanding its reach with the wider community, stc Bahrain, a world-class digital enabler, has partnered with Thai Mart, the only complete Thai...
Sports This Week

Raed Raffii and Raed Himmo shared the spoils for the second successive week of racing in the 2020/2021 BIC 2,000cc Challenge, held over the...
© GO ALIVE MEDIA
MORE STORIES