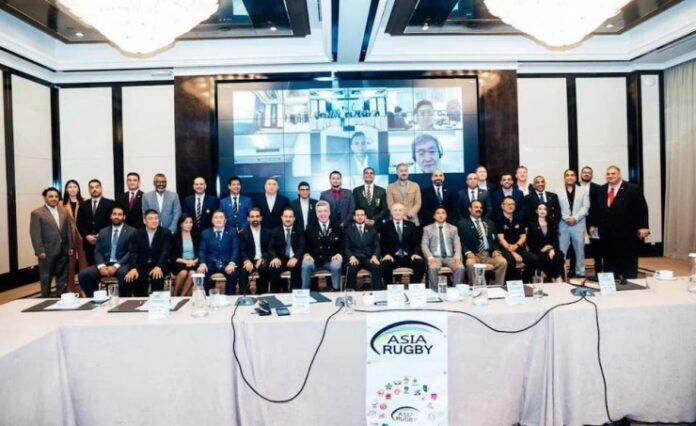 Bahrain Rugby Federation (BRF) has been accepted as a member of Asia Rugby, the regional governing body for rugby.

BRF President Nader Shaheen detailed at the Asia Rugby bi-annual General Assembly in Bishkek, Kyrgyzstan the history of rugby in Bahrain over the past 50 years and the plans to develop the sport in accordance with World Rugby guidelines.

Following Nader’s presentation, the General Assembly voted unanimously in favour of accepting Bahrain Rugby Federation as a member. Asia Rugby has 35 other member countries, covering the geographical area from Jordan to China, and including North Africa.

Bahrain Rugby Federation was established in February 2022 following the directives of His Royal Highness, Shaikh Khalid bin Hamad Al Khalifa, First Deputy Chairman of the Supreme Council for Youth & Sports, Chairman of the General Sports Authority and President of Bahrain Olympic Committee to establish the federation.

A Bahrain Rugby Federation Committee headed by Nader Shaheen was set up to launch the process.

Asia Rugby membership enables Bahrain to field a national representative team in competitive and friendly international fixtures against the other 35 member countries of Asia Rugby, including participation in 15s and 7s tournaments.

It will support the involvement of Bahrain Rugby Football Club in cross-border competitions such as the West Asia Premiership and Gulf Conference and will provide access to support in the development of coaches, officials and women’s rugby.

Bahrain Rugby Federation aims to encourage, promote and develop the game of rugby in Bahrain and contribute to the physical, psychological and mental care of the individual through sport, social and cultural upbringing.

This is in coordination and cooperation with all the sport establishments and authorities and within the rules and regulations applicable internationally and in Bahrain.

The federation also aims to strengthen and develop international relations for the game to achieve optimum sport representation at home and abroad.