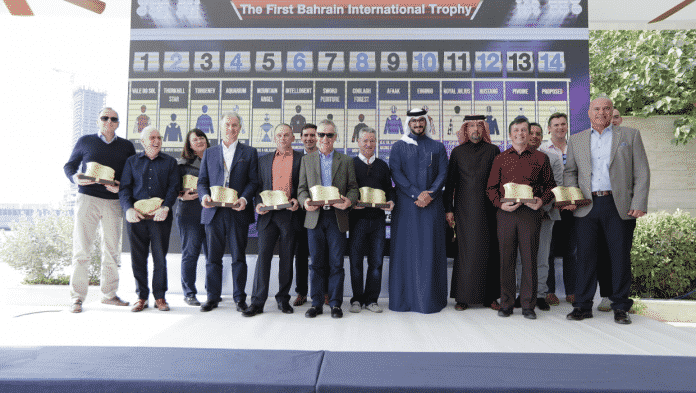 The eyes of the racing world were on Bahrain as it hosted the Bahrain International Trophy event – a world-class inaugural international horserace – on 22nd November 2019.

HH Shaikh Isa bin Salman bin Hamad Al Khalifa welcomed the participants with the calibre of in this marquee race.

The PPD was held to determine the starting gate positions of the 14 racehorses taking part in the Bahrain International Trophy at REHC this Friday. It also served as the stage for the grand unveiling of the winner’s cup, made from sterling silver and mahogany.

The Draw was presented by renowned TV racing presenter Nick Luck, along with noted horse racing announcer Mark Johnson and broadcast live locally on BTV and internationally on Racing TV. The presenting team and camera crews will also be in attendance to capture all of the splendour and nail-biting action from the REHC on race day.

HH Shaikh Isa commented: “On a personal note, I am very excited to welcome all these international horses. It is a solid field and would be a solid Group 2 race anywhere around the world. Bahraini-owned horses have had a very successful year on racetracks internationally, including an unprecedented two Royal Ascot winners, so it is only natural that we now take the next step here locally in the Kingdom to host an international horserace of this calibre.”

The Bahrain International Trophy is the Kingdom’s very first international horse race, coming as a direct result of HH Shaikh Isa’s vision, with the support of HH Shaikh Abdulla bin Isa Al Khalifa, Chairman of the High Committee for the Rashid Equestrian and Horseracing Club (REHC) along with local partners Gulf Air, BAPCO and Batelco.

Speaking after the draw, REHC executive director Shaikh Salman bin Rashed Al Khalifa said: “Attracting so many top owners, trainers, jockeys and horses for our first international race has exceeded our expectations and truly means a lot for Bahrain. I am sure this is only the beginning of a successful journey which will establish our country as a vital fixture in the racing calendar.”

The track has been cared for over the past five years by REHC facilities manager and clerk Neil Mackenzie-Ross, who brings a wealth of experience to the role after spending nine years in a similar role at Lingfield Park in England before moving to Bahrain.

Neil commented: “The reason I came to live and work here was for the opportunity to get Bahrain to a position where we could have international racing like this, so there is a real sense of achievement about staging the Bahrain International Trophy.”

Preliminary races started on Friday at REHC at 1:40 pm, with the main race at 4:30 pm. The event was open to the public free of charge in addition to being broadcasted live locally on BTV and internationally on Racing TV.

Representing champion trainer Allan Smith, Rustang tried to keep the first-ever valuable prize in the Kingdom. Rustang held the lead by ten lengths 400m from the finish. However, he slowed down taken over by Royal Julius, carrying former French champion jockey Stephane Pasquier to the lead less than 100m from the winning post. Amidst thunderous celebrations, Royal Julius claimed the first prize and a magnificent solid silver trophy fashioned by Garrard for owner Jean-Jacques Biarese.

“It has been exciting to ride in Bahrain and I am delighted to have won the first edition of this important race.” Pasquier, jockey of Rustang said.