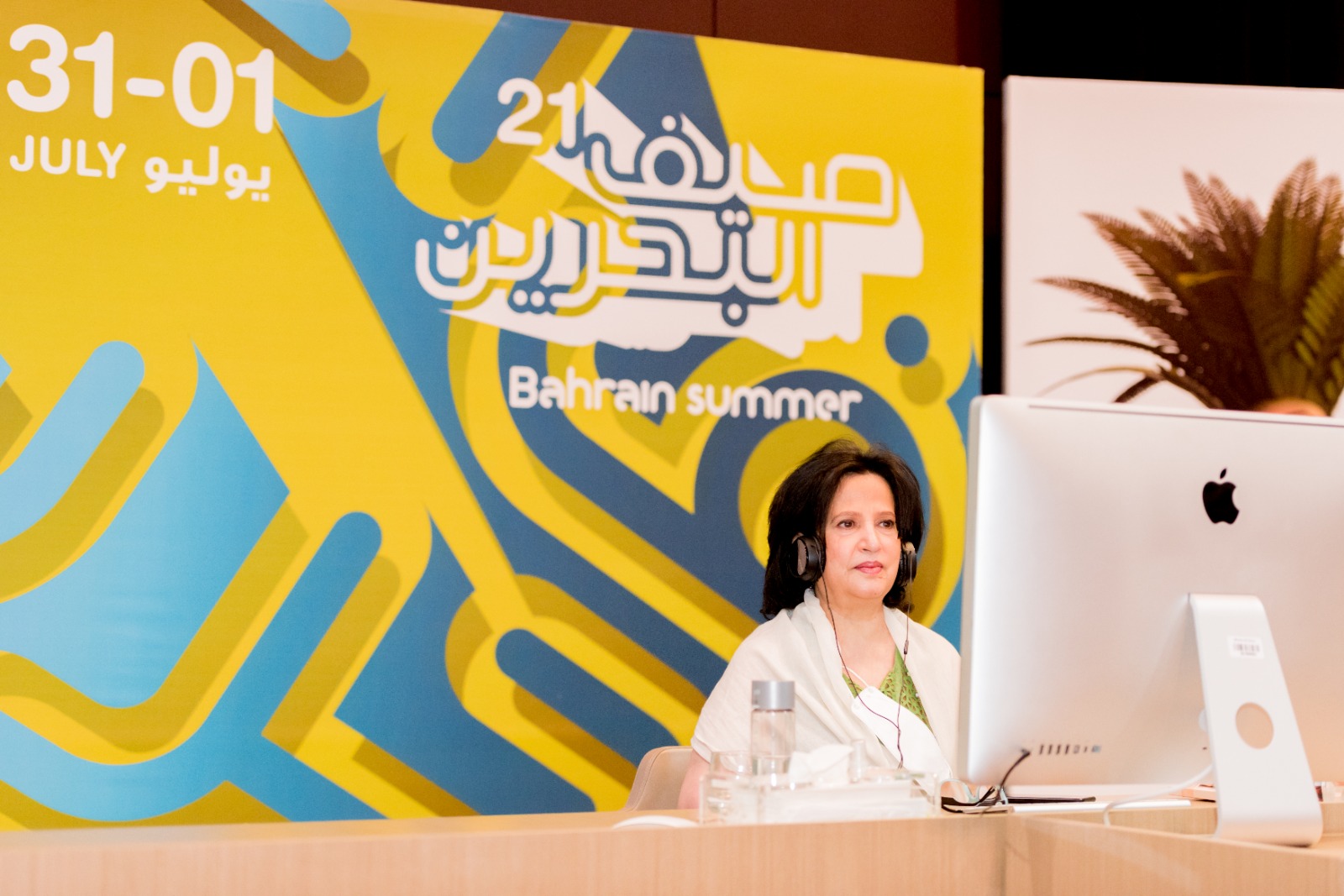 The Bahrain Authority for Culture and Antiquities (BACA) held a press conference to announce the slate of activities of the 13th edition of the Bahrain Summer Festival, which will be held remotely in the month of July.

Her Excellency Sheikha Mai bint Mohammed Al Khalifa noted, “This year’s Bahrain Summer Festival will be closer to the audience than ever before despite the distance imposed by the global health crisis. Our message is that our cultural seasons are sustainable and will continue.”

“Since the crisis’ onset, we have been investing in our technical capabilities so that we may bring the cultural movement into the virtual world and stay engaged with the public, both in the Kingdom of Bahrain and abroad. In doing so, we have successfully transcended borders and reached a much wider audience. We take equal pride in the fact that this year’s festival will coincide with our celebration of the Pearling Path project, set for completion later this year,” she added.

“This annual event continues to serve as an example for how cooperation between various parties can play a pivotal role in the advancement of the cultural movement, and I extend my deepest gratitude to the embassies, public and private institutions, and supporters who graciously contributed to the enrichment of this year’s festival program,” Her Excellency concluded.

For her part, Her Excellency Sheikha Hala bint Mohammed Al Khalifa said, “The Bahrain Authority for Culture and Antiquities believes in the importance of pushing ahead with cultural efforts despite the prevailing circumstances. After all, culture represents a beacon of hope for the world as it recovers from the fallout of pandemic. With that spirit in mind, this year’s festival program brings an exciting assortment of multicultural events and activities that will be conducted via the Authority’s online and social platforms, including live performances and concerts and creative art workshops.”

The full schedule of the Bahrain Summer Fesitval, which is set to run from July 1 – 31 as part of BACA’s larger year-long Pearling Path cultural program, can be accessed on BACA’s website (culture.gov.bh). The public can stay up to date on all the latest happenings surrounding the festival via its dedicated social media channels (@Nakhoolbah), including broadcasts of all live events on YouTube.

Catering to all ages and interests, the festival’s events and activities range from stage plays and music concerts to workshops, cooking shows, and other forms of entertainment, as well as the Nakhool Star talent competition.

The festival will kick off on July 1 with Resto Maryam, a Lebanese stage play which will be shown throughout the month on the festival’s YouTube channel. Running alongside it will be a series of public competitions held every Monday and Thursday, as well as fun and educational activities and games, all of which can be accessed on BACA’s website.

Other shows include a traditional Chinese music concert (July 4) and Tony Memmel and his Band (July 7), held in cooperation with the embassies of China and the United States, respectively. This will be followed on July 18 by two shows held in cooperation with the Embassy of Palestine entitled The Children of Our Neighborhood and The Wonders of Science, and a concert organized by the Egyptian embassy entitled Rehab Mutawa featuring the Bahrain Music Band. Local music is also strongly represented, with performances by Galali Folklore Band (July 21), Mohammed bin Faris Band (July 22), and the Bahrain Police Band (July 23).

As for workshops, the festival’s program includes a children’s short story writing classes (July 3 – 6) that will also serve as the platform for this year’s Nakhool Star talent competition, as well as music, arts, and cooking workshops showcasing the cultures of several countries around the world.

In conclusion, BACA thanked its partners and contributors for the 2021 Bahrain Summer Festival, which include the Ministry of Interior, the National Institute for Human Rights, the Supreme Council for the Environment, as well as embassies of the Republic of France and Alliance Française, the Republic of Italy, the United States of America, the People’s Republic of China, the State of Palestine, the Russian Federation, the Arab Republic of Egypt, and the Republic of the Philippines, as well as all BACA staff, and the artists and organizers of its workshops and activities.

More information on the festival can be found BACA’s website (www.culture.gov.bh) and social media channels (@NakhoolBah) and @CultureBah).