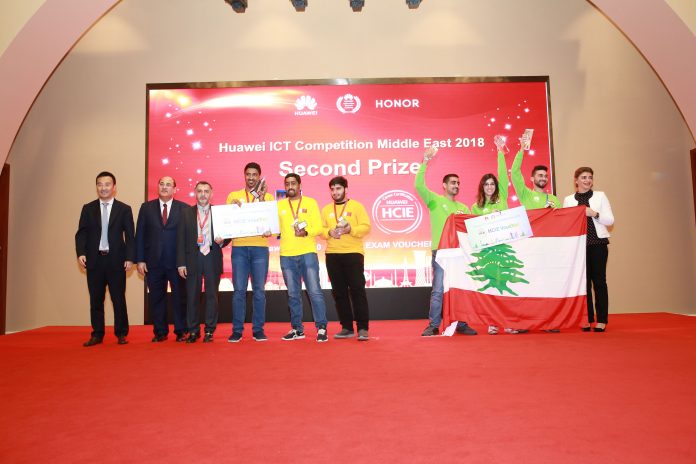 A team of 3 students from University of Bahrain, Bahrain Polytechnic and AMA International University walked away with second place prize at Huawei’s International ICT Skill Competition finals and award ceremony in Shenzhen, China. The winners were selected following a grueling three months of qualifying rounds that saw participation from 10 countries in the Middle East. Their prizes were awarded at the ICT Talent Cultivation & Award Ceremony in Shenzhen.

In total, 14,748 students across the Middle East applied for the competition, from which 4,915 were selected to take part in the preliminary rounds. 214 students passed on to the final round, and 39 in total from 13 teams travelled to China to compete internationally. The ICT Competition was made possible through the cooperation of 17 ministries across 10 countries. 226 colleges and universities took part in total, and 65 participated in Huawei’s roadshow. 950 students additionally passed the Huawei HCNA certification exam. The 13 finalist teams had a unique opportunity to learn from Huawei’s leading global ICT on an all-expense paid trip to Huawei’s headquarters in China.

All participants underwent highly selective examinations at the national level. Participants worked in real laboratories and tackled some of the industry’s most complex challenges related to cloud computing, switching, routing, and other key ICT solutions and technologies related to digital transformation. The finalists competed in day-long finals, participated in a technology workshop by global ICT experts, and witnessed a high-level panel discussion by senior delegates from xx Middle East countries to China.

“Building a pool of high quality ICT talent is a critical success factor for governments aiming to transition to knowledge-based economies. As one of the world’s leading innovators, knowledge-transfer has always a core pillar of the Huawei ethos. Combining this with our commitment to support governments in the region as they work towards achieving their national vision goals, we are proud of the ICT Skill Competition and all that it has achieved over the past six months. The platform has demonstrated beyond a doubt that the young talent in the region has the potential to mature into world-class experts. Today, we re-dedicate ourselves to working even more closely with students across the region to better equip the next generation of technology leaders,” said Charles Yang, President, Huawei Middle East.

INJAZ Bahrain has successfully concluded this year’s version of its annual Young Entrepreneurs competition, which was held online for the first time ever on...
Read more
Spotlight