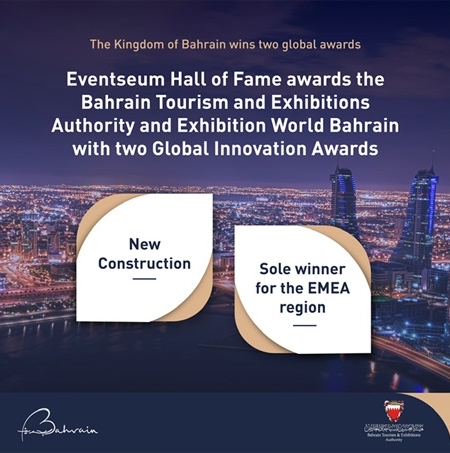 The Bahrain Tourism and Exhibition Authority (BTEA) and Exhibition World Bahrain (EWB) won the 2021 Eventseum Hall of Fame Global Innovation Award for Convention and Conference Centres for the regions of Europe, the Middle East, and Africa.

The Kingdom also won the award for “New Construction” in the IMEX 2022 exhibition held in Frankfurt, Germany.

The CEO of BTEA Dr. Nasser Qaedi said the prestigious award is a testament of the Tourism Authority’s leadership in innovation in the tourism and MICE sector, both regionally and on a global scale.

Winning this international award highlights the Kingdom’s success in establishing and operating one of the largest regional exhibition and convention centres in the world, he added.

“This is aimed at boosting the Kingdom’s position as a leading MICE destination and attracting future tourism investments and events,” he said.

The CEO said that winning the award showcases the BTEA’s success in achieving the Kingdom’s visions of establishing one of the largest conference and exhibition spaces in the region, according to global standards.

Such efforts will support Bahrain’s position as a destination for international conferences, investments, and tourism, he said.

Dr. Qaedi stressed that the BTEA’s team is dedicated to innovation and creativity, especially in the fields of care and hospitality.

Art Moldavia Schuchman, Executive Director of Eventseum Hall of Fame, said that the Eventseum Global Judging Panel described the EWB as one of the most ambitious tourism infrastructure projects in the Middle East.

“The centre is expected to provide unprecedented momentum for the exhibition and events industry across the region, while exhibiting enormous potential and innovations at many levels in terms of design and operation,” she said.

The BTEA’s delegation also participated in the IMEX exhibition, introducing Bahrain’s advanced tourism infrastructure and tourism potential, as well as the ambitious goals outlined in the Bahrain Tourism Strategy 2022-2026.