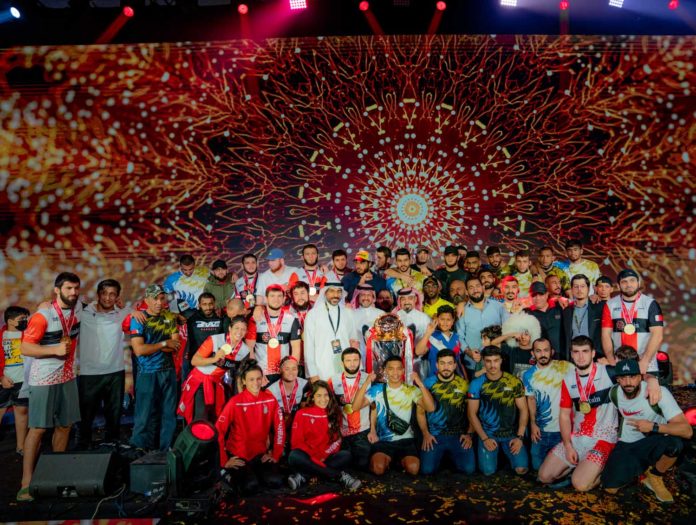 His Highness said: “We are pleased with the new accomplishment of our MMA national team. This success is a source of pride as it came following strong performances that were put together by the team members.

HH Shaikh Khaled continued: “This honourable result is a confirmation of the advanced level of the Bahraini MMA sport, which succeeded in leaving its mark and achieving many accomplishments, which brought the team to the top of the IMMAF ranking. The Bahraini champions lived up to the expectations by deservedly winning the title.”

His Highness stated that this victory represents a great motivation to continue on the same path.

His Highness also expressed appreciation to the Federation’s efforts in creating the ideal atmosphere ahead of the tournament, pointing out that this played a key role in the success.


His Highness Attends Final Day
HH Shaikh Khaled bin Hamad Al Khalifa has attended the final day of BRAVE International Combat Week which featured the 3rd place match-up between Kazakhstan and Mexico in the MMA Super Cup, and the final between Bahrain and Ireland.

His Highness had also witnessed the 57th edition of BRAVE CF, which was held on Friday at the Khalifa Sports City hall. The event featured 12 bouts, the most prominent being the Bantamweight World Championship between Bahrain’s Hamza Kooheji and Canada’s Brad Katona.

His Highness stressed that this honourable result reflects the advanced levels of mixed martial arts in the Kingdom, through which it was able to secure various achievements.

HH Shaikh Salman added that the strong performances delivered by the national team’s champions in this tournament reflected the great preparations to participate in this international sports tournament. His Highness also congratulated the President and members of the Bahrain Mixed Martial Arts Federation and all members of the team on this achievement.

Exhibition Game
The Arab champions and the Balkan champions presented an interesting match during BRAVE International Combat Week on the final day. The game took place prior to the 3rd decider. The audience enjoyed this match, in which the champions presented distinguished performances in the mixed martial arts sport.

Ireland Wins Silver Medal
The Irish national team finished second after losing to our national team. The game ended 9-0, meaning that Ireland had to settle for second place.

Bronze goes to Kazakhstan
The Kazakhstan national team finished third after defeating Mexico with 9 clean fights, following a great performance by their fighters throughout the game.

Loss of “The Pride of Bahrain”
Bahraini fighter Hamza Kooheji lost to Canadian Brad Katona during their fight for the Bantamweight World Championship title. The fight was the headliner of BRAVE CF 57. Despite the loss, Hamza Kooheji appeared at remarkable levels amid great support from HH Shaikh Khaled bin Hamad Al Khalifa, as His Highness’ backing played a prominent role in Kooheji’s brilliance despite his loss.

Kooheji Requests a Rematch
Hamza Kooheji confirmed that he had submitted a request to have a re-match against Katona. He attributed his decision to several officiating errors that influenced the fight’s result.

The Khalifa Sports City hall has turned into a global arena thanks to the great work of the Organising Committee who made the event on a par with major international MMA events. The Khalifa Sports City hall was transformed into an architectural masterpiece of beauty, amid great admiration from the audience. BRAVE CF 57 witnessed a great turnout from fans who were keen to attend and support the Pride of Bahrain.

Qambar said: “We are proud of this great success that has been achieved, as it comes as a result of the interest and support of HH Shaikh Khaled bin Hamad Al Khalifa.”

He added, “Bahrain has become a major hub for hosting international sports events, which is an affirmation of the Kingdom’s distinguished cadres in various fields.”

BRAVE CF President: A New Success for Bahrain
BRAVE CF President Mohammed Shahid confirmed that the directives of HH Shaikh Khalid bin Hamad Al Khalifa played a prominent role in creating the ideal atmosphere for the fights and showcasing them in the best organisational form. He stated that this contributed to introducing high-quality fights that confirm the great development of this sport in Bahrain.

Notable Efforts of the Volunteers and Services Committees
The Volunteers and Services Committees played a prominent role in the success of BRAVE International Combat Week after their prominent role in various tasks. The Volunteers Committee, headed by Fahad Yaqout, worked tirelessly throughout the tournament, as Yaqout confirmed that the Committee was keen to implement the directives of HH Shaikh Khaled bin Hamad Al Khalifa and the Organising Committee to create the ideal atmosphere for all participants. Meanwhile, the Head of the Services Committee, Rami Al Kaabi, expressed his happiness with the committee’s role and the members’ efforts throughout the tournament, noting that the committee included young Bahrainis with high potential.