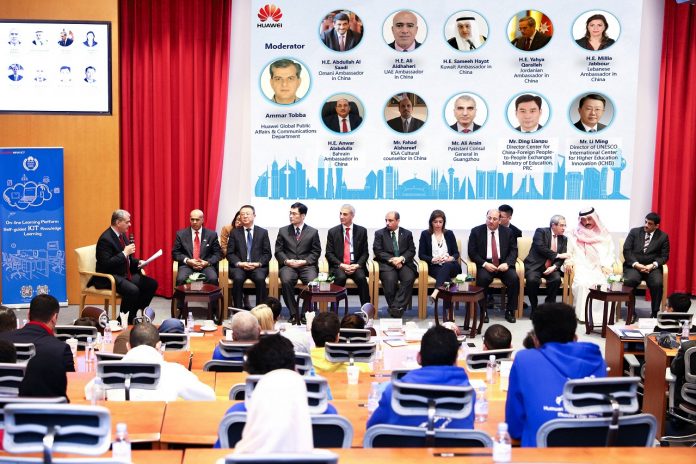 H.E. Anwar Alabdulla, Bahraini Ambassador in China, along with other Middle Eastern government representatives in China, traveled to Huawei’s ICT Talent Cultivation Summit this week in Shenzhen. The congregation addressed the future needs of local sectors and industries, and how ICT talent development will drive national digital transformations.

Every country that took part in the competition was represented, and the winner of the Skill Competition itself was announced during the Summit. Chen Lifang, Corporate Senior Vice President Director of the Board Huawei Technologies Co., Ltd., opened the proceedings, followed by H.E. Abdullah Al Saadi, Omani Ambassador to China and Dean of Arab Ambassadors Council. Professor Zhao Jianhua then delivered a keynote on the theme, “ICT for Better Education and Societies Development.”

Each country’s unique challenges and opportunities were raised during the following panel titled “ICT Talents, Key for Future Development”, where participants were given the opportunity to discuss how digital transformation will enable Middle East leaders to achieve the targets outlined in their national plans and visions, and the importance of nurturing local talents to achieving digitalization. The key theme that shone through was the need to support programs such as the ICT Skill Competition in order to monitor, understand, and improve talent development initiatives in key markets.

“The ICT Skill Competition is a vitally important global initiative for Huawei, and it has been an honor hosting the Ambassadors from the Middle East at the event this year,” said Charles Yang, President of Huawei Middle East. “It is always valuable to be able to hear, understand, and discuss the needs and opinions of key leaders in different countries. The sessions will certainly help us in our commitment to building the region’s future leaders of ICT.”

This year’s competition saw 10,285 top students from over 120 of the region’s universities register, with 13 student teams travelling to Shenzhen, the home of Huawei, in China. The aim of the initiative is to directly contribute to the development of the ICT talent ecosystem – essential to coping with the region’s digital transformation.

The annual competition is in line with Huawei’s belief in the importance of free knowledge sharing and collaboration with regional partners to create a global ecosystem of digital expertise that will transform societies across the world. The success of the competition has reaffirmed Huawei’s belief that cooperation between government authorities, enterprises, and colleges and universities will enable the Middle East to rapidly develop a pool of digitally-fluent talent ready to drive forward digitalization. The ICT Skill Competition is a key initiative that will support the region’s governments to achieve the ambitious targets outlined in their national agendas and transform their nations into knowledge-based economies. Ultimately, openness and collaboration with Middle East partners will enable Huawei, and the Middle East, to Build a Better Connected World.