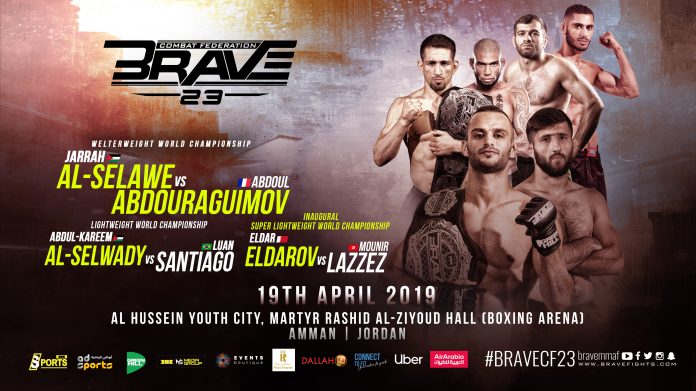 March 28, 2019
Facebook
Twitter
Pinterest
WhatsApp
Linkedin
Brave Combat Federation the fastest growing MMA promotion in the world will organize the much-anticipated event in Jordan, on April 19th 2019. Brave CF 23 takes place in Amman, where the Bahraini standout sports organization will look to revive the sport of MMA once again in the country.
After a thunderous fight card in the Philippines, where the Brave warriors set the tone for an unforgettable year in MMA for the promotion, Brave Combat Federation will look to repeat the success it had last year in Jordanian soil. In March of 2017, Brave 10 sold out the local arena and made stars out of local fighters such as Abdul-Kareem Al-Selwady and Jarrah Al-Selawe.
Now, the duo will return as world champions and widely recognized figures in the MMA community. Al-Selawe defends his crown against submission machine Abdoul Abdouraguimov and Al-Selwady looks to maintain his Brave undefeated record when he meets striking sensation from Brazil Luan Santiago.
In a historical fight card, Brave will have three world championships on the line in total. Apart from the Jordanian heroes putting their belts on the line, Bahrain’s own and KHK MMA head coach Eldar Eldarov will look to become the world’s first-ever Super Lightweight champion as he takes on the Tunisian knockout specialist Mounir Lazzez.
Also set for fight night are two other KHK MMA standouts. Welterweight Ikram Aliskerov will look to maintain his undefeated record against all-around prospect Khamzat Chimaev. Also representing the gym is Akhmed Magomedov, who will go for his third victory under the Brave Combat Federation banner when he meets Steven Gonçalves, from South Africa.
- Advertisement -
Facebook
Twitter
Pinterest
WhatsApp
Linkedin
Previous articleThe Fourth Edition of the Arabian Women Fashion Expo 2019 Kicks Off
Next articleBlack Tap shakes up late-night dining scene with extended weekend service hours