A recently published book on famous whale skeleton displays around the world has featured the Bryde’s whale skeleton on display in front of the Bahrain Science Centre on its front cover. Details on the skeleton and where it was found are also described in the book.

The author of the book ‘Whales’ Bones of France, Southern Europe, the Middle East and North Africa’, Nicholas Redman, visited Bahrain from London in 2013 specially to see the whale on display on the archway in front of the Bahrain Science Centre. He spent a whole day measuring, photographing and discussing the whale skeleton display before returning to London. 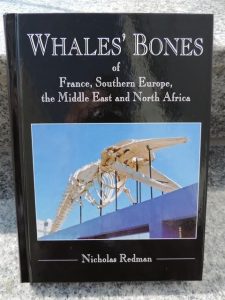 The carcass of the whale whose skeleton is on display was washed up on the eastern end of the King Fahed Causeway on 15th May 1995. The bones were recovered by staff from the Bahrain National Museum who cleaned and preserved them. The skeleton was first put on display outside the Bahrain Science Centre in July 2012.

The skeleton is that of a fully grown adult Bryde’s whale Balaenoptera brydei. It measures 14 m long and would have weighed about 20 tons in life. Bryde’s whales live in the Gulf as well as in all the warm oceans of the world and are related to the blue and humpback whales, which are baleen whales that feed on shoaling fishes, plankton and squid. They do not have teeth, like toothed whales (such as sperm whales) and dolphins, but huge baleen plates that filter their food out of the water. These plates hang from their enormous jaw bones.

Bryde’s whales can swim at speeds of up 24 km/hr but usually cruise along at a more leisurely 5-6 km/hr. They dive for 5 to 15 minutes to depths of 300 m and communicate with one another using deep groans and moans. Noise created by ships and coastal industries interferes with their ability to hear one another.

They breed every second year and have a gestation period of 12 months and the mothers nurse their young for a further 6 to 12 months. The calves are 4 m long and weigh 1,000 kg at birth! Bryde’s whales have been commercially hunted for over a century and there are estimated to be between 90,000 and 100,000 individuals left in the oceans. However, they are poorly studied so we do not know their exact conservation status.

One of the most successful events in the history of the Bahrain Science Centre took place under our whale skeleton. South African actor David Müller recited the epic poem ‘Whale Nation’ by Heathcote Williams while crouching within the rib cage of the whale. This dramatic poem is a celebration of the beauty, intelligence and majesty of the largest mammals on Earth and a strong appeal for their conservation.