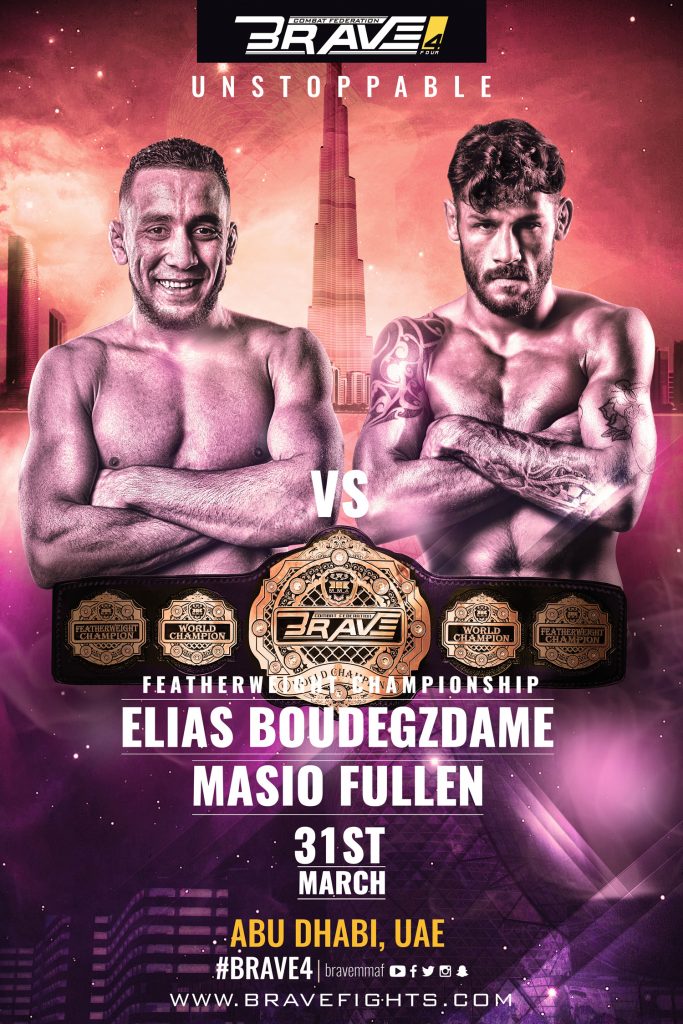 When Brave Combat Federation lands in Abu Dhabi, UAE for the first time on March 31, it will be a historic night, with Masio Fullen and Elias Boudegzdame battling it out at Brave 4: Unstoppable  to become the promotion’s first world champion at 145 pounds (featherweight).

This five-round championship bout, which airs live on BraveFights.com from IPIC Arena At Zayed Sports City, is also a must see because it pits brave’s top featherweights against each other, as the for UFC fighter “Lobo”  Masio Fullen ” squares off with the most hyped and highly talented Arab featherweight, Elias Boudegzdame.

The fighting pride of Guadalajara, Fullen, is one of the most experienced combat sports athlete in the promotion. A veteran of 17 MMA fights, widely considered to be an all-time great representing Guadalajara, Fullen made his promotional debut at Brave 1 ” The Beginning ” on Sept.23, 2016 where he shocked the world with a first round TKO ( technical knockout ) of  India’s most popular fighter Abdul Muneer that earned him this title shot. On March. 31, “LOBO” can make headlines once again if he can defeat Algeria’s Boudegzdame to become the first ever Brave Combat Federation title holder.

Intent on making some history of his own in Abu Dhabi, Algeria’s Elias Boudegzdame has fought all over Europe and Middle East bagging a record of 13 wins and 4 losses. Boudegzdame has accumulated 4 consecutive wins, picking up a remarkable submission victory over MMA veteran Walel Watson at Brave 2, setting the stage for his first title fight on March 31. That submission also earned him the prestigious 2016 ArabsMMA Submission of the Year Award.

Brave 4: Unstoppable not only holds the promotions first ever title fight, but Brave president Shahid promises that this will be the biggest fight card in the history of middle east.

“THE WHO’s WHO of middle eastern MMA will take part of this card, UAE fight fans, get ready!”

The Rotary Club of Salmaniya held its regular virtual meeting on Wednesday 2nd September 2020. The club was privileged enough to have internationally renowned...
Management Principles