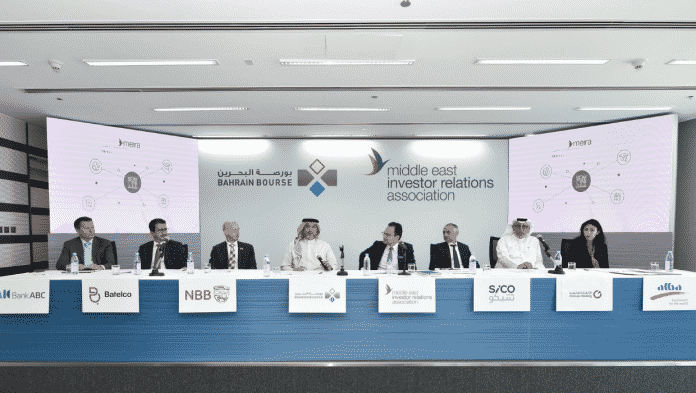 Batelco is proud to announce that the Company has signed an agreement to become one of the founding partners of the Bahrain Chapter of the Middle East Investor Relations Association (MEIRA).

MEIRA has officially launched a new chapter in Bahrain, to further develop and enhance best practices in Investor Relations (IR) across the Kingdom of Bahrain.

The signing ceremony took place at the Bahrain Bourse premises with Batelco Chief Financial Officer Faisal Qamhiyah singing on behalf of Batelco. The ceremony was followed by an IR seminar attended by more than 30 representatives from local listed companies who had the opportunity to discuss the importance of the IR function from the investment community perspective. This initiative is part of the MOU signed between MEIRA and Bahrain Bourse in order to support the development of international standards in IR and corporate governance across the Kingdom.

Commenting on the new chapter, Andrew Tarbuck, MEIRA Chairman said: “Since MEIRA signed the MOU with Bahrain Bourse in November, we have been working very closely with the exchange to develop a dynamic and committed Chapter in the Kingdom. This is a great milestone for MEIRA and the Bahraini capital markets and represents a unique opportunity to raise awareness of the importance of IR in the Kingdom. We look forward to collaborating with our Chapter Members and with Bahrain Bourse as the Chapter Head to increase the effectiveness and quality of the IR function among the organisations in the Kingdom through our wide range of activities and training programmes.”

Faisal Qamhiyah, Batelco Chief Financial Officer added, “This is a great opportunity for Batelco to be part of this initiative to promote and raise awareness relating to investor relations’ best practices across the Kingdom of Bahrain.

On this occasion, Shaikh Khalifa Bin Ebrahim Al Khalifa, Chief Executive Officer of Bahrain Bourse, commented: “The establishment of the Bahrain MEIRA Chapter sets the ground for establishing a solid network of IR professionals in the Kingdom of Bahrain, and will certainly help in advancing the IR function and promoting international best practices among listed companies in the capital market.”

“Bahrain Bourse will play a major role in this initiative to promote best practices in IR. Further, the roll-out of the chapter will also signal to the international investment community our commitment and enhance the possibility of inclusion in emerging markets indices,” added Shaikh Khalifa.

Members of the MEIRA Bahrain Chapter will now have access to a wealth of IR knowledge from global leaders in the profession in the form of specific educational initiatives and will be able to benefit from engaging local events aimed at uniting and advancing the IR community.

The Charity Work section at the Sunni Endowments Directorate has distributed the Eid Al-Adha gifts and sacrifices, in coordination with charity societies across the...
Read more
Inside Bahrain

Bahraini trucks and their drivers will be allowed to resume their trips to the Kingdom of Saudi Arabia via the King Fahd Causeway today,...
iGA

Planning a virtual event? Need to reach government officials in specific directorates? The Government Directory App is your essential guide to the numerous governmental...
Tech

One day I read a news item which made me feel annoyed and a bit worried. It was reported that in Mumbai, youngsters from...
Sports This Week

HH Shaikh Nasser bin Hamad Al Khalifa, Representative of His Majesty the King for Humanitarian Work and Youth Affairs expressed his delight after his own...
PR This Week

As part of Accor Premium brands, Mövenpick Hotel Bahrain has received Accor #AllSafe label and was audited and also certified by Bureau Veritas on the 19th...
Spotlight

Land Rover in the Kingdom, has been awarded the enhanced status of an official Special Vehicles Operations (SVO) dealer. Bringing to Bahrain the first-of-its-kind...
Tech

Your next Samsung Galaxy or iPhone may soon include the toughest gadget glass Corning has ever created. The company’s announcing Gorilla Glass Victus —...
© GO ALIVE MEDIA
MORE STORIES