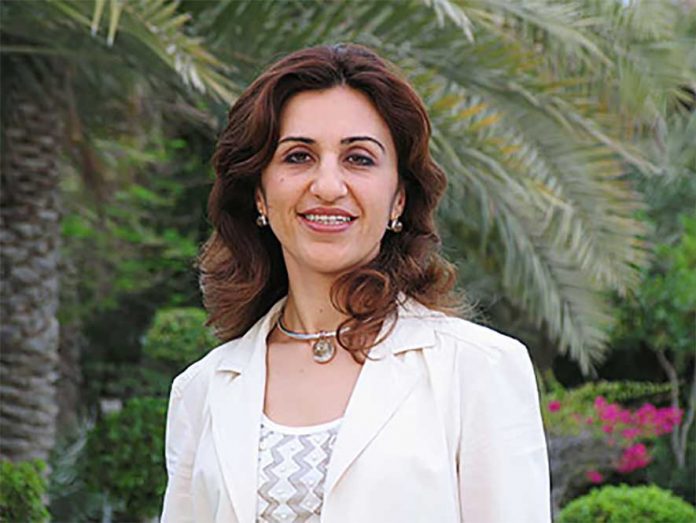 With AlRiwaq Art Space celebrating its 20th year anniversary, I decided to sit down with the force behind the movement, Bayan AlBarak-Kanoo: an icon in the fields of art and culture and a pioneer of modern street-life in Bahrain.

I rush to meet Bayan AlBarak-Kanoo at AlRiwaq at 1:30 pm. I am late but not worried- it’s a week into this year’s “Nest” and I know they will be camping there anyway. The usual lunch spots at the front of Adliya strip are full, but as I walk through the back, past the art set up for the month-long street fair, I destress from my day in preparation for what I know will be a delightful and stimulating chat.

A man on the phone mindlessly nods hello as I walk into AlRiwaq café and inside people gently look up from their laptops and friends as I pass.

I ask for Ms. Bayan’s office and am directed upstairs. I have never been upstairs and in fact, am still unsure where I was… the upper levels of AlRiwaq is a bunch of mezzanines. I find the correct one easily, slide inside, exchange warm hellos, kisses and quick updates, and accept the same Turkish coffee as Bayan has in front of her.

I credit Ms. Bayan with initiating street-life in Bahrain and on this she is rationally modest: “AlRiwaq grew organically and through necessity, even the mezzanine floors were added to fit our purpose into our space and as our purpose and process grew, we spilled out on to the street.

“I moved to Bahrain from Iraq at 19 when I got married, and after completing an undergraduate from the University of Bahrain and having two children [she now has five] I opened AlRiwaq as an art gallery. Along its 20 years, our identity changed from a gallery to a nonprofit “art-space”. This was due to a necessity we saw in encouraging creative expression.

‘…as our purpose and
process grew, we spilled out
on to the street.’

We investigate what artists need to thrive and we provide guidance, education and potential funding. Art and culture are borderless and so local artists require a platform to connect to the global art scene and funding to show internationally. We also host foreign artists to vitalize thelocal landscape thus enabling artistic expression to build on itself and evolve.”

I am unconvinced that necessity was the sole impetus for the switch from gallery to nonprofit art-space and press harder, where Bayan thoughtfully admits she was driven by “responsibility” and then resolutely adds “and a commitment to concepts and the interaction with them”. 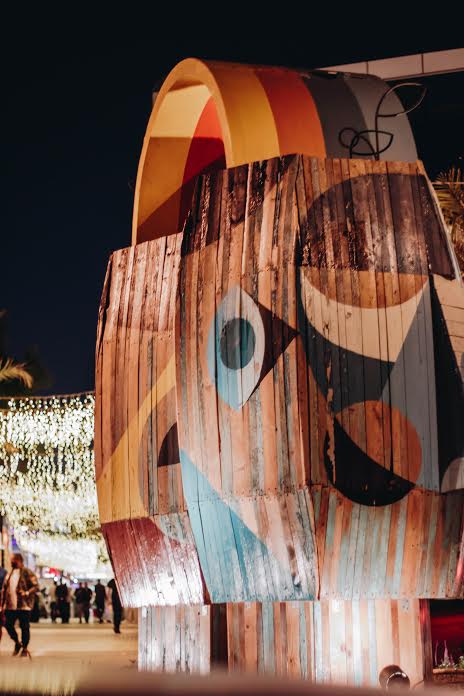 Bayan thoughtfully admits she was driven by “responsibility” and then resolutely adds “and a commitment to concepts and the interaction with them”.

“I grew up in Iraq in a culture filled with music, film and visual art and the 70s especially was a vibrant time. In school breaks, we would go to the nearby gallery. I came and found Bahrainis accepting of others, tolerant and patient. In fact, there was no debate. This was foreign to me as Iraqis are very vocalwith their opinions, casually and in public. We have a culture of outspokenness and debate and this is what drives evolution. Art in itself is not an opinion, it is non-confrontational. Art is a platform for expression and the analysis of concepts in different lights and at varying angles, providing a base for discussion and growth.”

“This year the theme of The Nest was “To Appeal” a judgment- to rethink rules governing society and to challenge their application through debate- as in a court of appeals. The aim of our themes is to enable thought: we throw out a concept and see what creatively arises and how the public reacts.

“The beauty of street art is in its temporary nature, it vanishes, so the impact it leaves on the individual is what is important. Consumer mentality wants to own, but street art confronts and challenges that feeling.

‘Art in itself is not an opinion, it is non-confrontational. Art is a platform for expression and the analysis of concepts’

“A previous Nest theme was Repetition, like stamping the same picture over and over, creating a larger image and even a different picture entirely. This can relate to trends for example. As a culture, we mock imitation but the fact is that growth is a process of testing and building on what already exists.”

She pauses and we simultaneously look out onto the sun-drenched terrace behind the desk, a unique and surprising feature in the old Bahraini house AlRiwaq inhabits. I absorb our conversation while Bayan prepares her next thought…. In business for her, preparation and action are intertwined:

“We can’t remain private and stagnant, we must show our ideas to test them. The nest is a perfect venue for this as it is interactive and not intimidating like a shop.

“Because of its public nature, we must be even more responsible. We have a vetting process which ensures the creativity, originality and quality of our vendors and contributing artists and are proud to have been a launch pad for artists and architects who have proceeded to win awards and also for SMEs who utilized the feedback they gained at the Nest to build strong businesses.

‘Bahrain generally is composed of layered cities, unintentional, simply the creative accumulation of things. It is alive with its people’s spirit.’

“We invited the public to walk the back alleys of Adliya, which were empty and unapproachable when the Nest began as ‘Manamatna’ years ago. The people that walked there breathed life into the area, and so more public spaces opened, which fed back into the energy of the area”

To onlookers, AlRiwaq and Adliya’s Block 338 are locked in a symbiotic relationship. The area owes much of its diversity and liveliness to the gallery-come-art-space and The Nest, previously ‘Market 338’ and ‘Manamatna’ before that. Bayan cuts me off, as my assumption of Adliya’s debt borders on offence.

‘Adliya has its own vibe. We grew with it and into it.’

“Adliya has its own vibe. We grew with it and into it. Bahrain generally is composed of layered cities, unintentional, simply the creative accumulation of things. It is alive with its people’s ingenuity. For example, most of Adliya was residential before zoning changed, so we find commercial establishments occupy old houses. Zoning changed again recently to allow for a height of up to 15 meters so restaurants are building rooftops with beautiful views on to Manama. This wasn’t planned. The area thrives, grows, and builds on itself.”

This must be the hundredth time Bayan uses some form of “thrive” or “grow”. I imagine the woman in front of me as part of a lively ecosystem-like an elegant tree in a forest- and am filled with appreciation for her palpable resilience and for the vitality of the environment we call home.

At this point, Bayan’s husband stops by her office. They share a laugh about nothing in particular. He is proceeded by their daughter Zain who has been busy in the background and now says she must leave to fetch her son, Bayan’s first grandchild. I figure this is my cue to leave.

I am filled with appreciation for her palpable resilience and for the vitality of the environment we call home.

In our good-byes, I mention that I am turning 30. “This is the age. I started AlRiwaq at 30.” This inspires me, as did the entirety of our meeting which I ruminate over throughout the next weeks. Bayan AlBarak-Kanoo is a woman of resilient spirit, a brilliant creative mind, with an ingrained and unquestionable sense of duty to her surroundings- wherever they are.