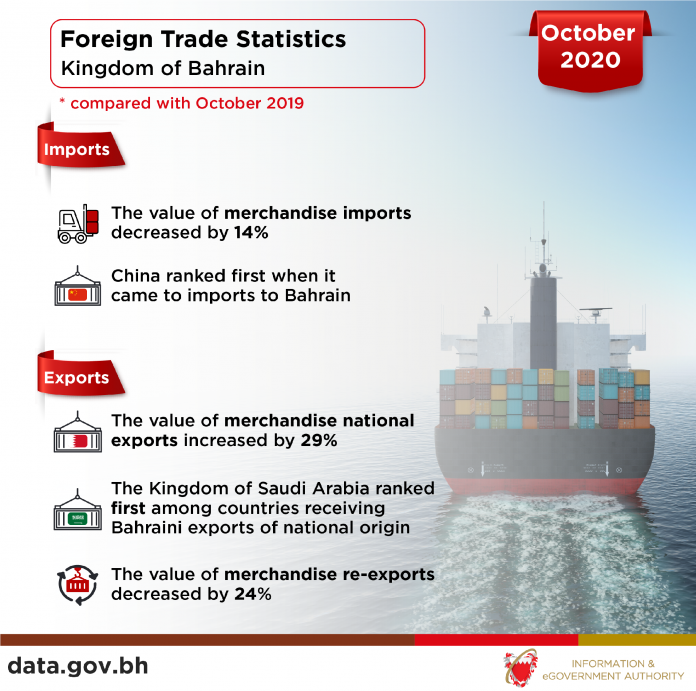 According to the report, China ranked first when it came to imports to Bahrain, with a total of BD52 million, Kingdom of Saudi Arabia was second with BD29.2 million; and the United States of America was third with BD28.9million.

Aluminum oxide merged as the top product imported into Bahrain with a total value ofBD29million, while non-agglomerated iron ores and concentrates was second withBD22million, and four-wheel drive carsthirdwithBD18million.

The Kingdom of Saudi Arabia ranked first among countries receiving Bahraini exports of national origin, importing BD47million from Bahrain. Meanwhile, Malaysia was second with BD20million and Egypt third with BD19million.

Unwrought aluminum (not alloyed) emerged as the top products exported during October 2020 with BD33million, Agglomerated iron ores and concentrates alloyed was second with a value of BD29 million and Unwrought aluminum alloys third with BD25 million.

The total value of re-exports decreased by24%to reach BD57million during October2020, compared to BD74million for the same month of the previous year. The top 10 countries accounted for 84% of the re-exported value, while the remaining countries accounted for the 16%. The United Arab Emirate ranked first with BD16million Kingdom of Saudi Arabia second with BD15million, and the India third with BD5million.

Four-wheel drive cars the top product re-exported from Bahrain with BD9million, Agglomerated iron ores and concentrates came in second place with BD5million, and parts for airplanes came third with BD4million.

The trade balance, difference between exports and imports, the value of the deficit of the trade balance reached BD111 million during October of 2020 versus BD197 million for the same month of the previous year with decrease of 44%.