Eid is that time of the year...
CultureInside BahrainBIA New Passenger Terminal: A New Era for the Kingdom's Aviation Sector 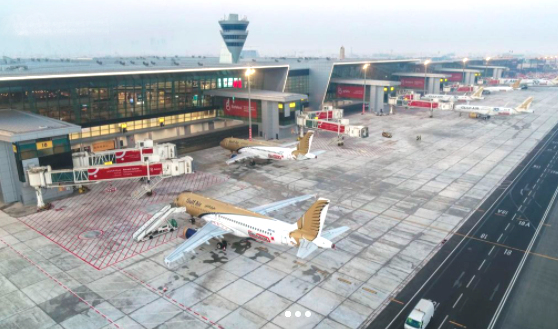 Operations at Bahrain International Airport’s (BIA) new Passenger Terminal commenced on Thursday, January 28th, in line with the directive of His Royal Highness Prince Salman bin Hamad Al Khalifa, the Crown Prince and Prime Minister. The transfer to the new facility marks the dawn of a new era for the Kingdom of Bahrain’s aviation sector.

His Excellency the Minister of Transportation and Telecommunications and BAC Chairman, Eng. Kamal bin Ahmed Mohammed noted that the transfer marks a major step for the Ministry and BAC under the leadership of His Majesty King Hamad bin Isa Al Khalifa.

HE the Minister praised the Crown Prince’s contributions to the project and thanked him for his guidance, highlighting his contributions towards the Kingdom’s many outstanding achievements in pursuit of its Economic Vision 2030, and bringing the Airport Modernization Program (AMP) closer to completion.

Launched in February 2016, the AMP is the largest investment in Bahrain’s aviation sector to date and one of the most important national projects in the Kingdom’s history.

HE the Minister said: “I would like to thank our strategic partners, contractors, all companies working in Bahrain International Airport, and all parties involved for their strong support for this national project.

We are very grateful for their assistance and contributions throughout, which were vital to the smooth and successful launch of the airport’s new infrastructure. Their contributions helped to ensure the project’s on schedule and on budget completion, without disrupting operations at the legacy airport, which has served the Kingdom efficiently for decades.”

BAC Chief Executive Officer Mohamed Yousif Al Binfalah said: “This milestone is the culmination of years of careful planning and hard work. It marks the start of an exciting new chapter in the Kingdom’s rich aviation history and positions BIA as the most modern boutique airport in the region.

Delivered by a Bahraini majority airport leadership team with the support of hundreds of young Bahrainis working in the aviation sector, the new terminal reflects the world-class capabilities of our local talent.

The 210,000sq m terminal, which is four times the size of the existing facility increases the airport’s capacity to 14 million passengers a year, having handled around 9 million in 2019.

Outlining the ambitious vision for commercial operations, Bahrain Airport Company (BAC) noted that there are just over 10,000sq m of core retail and dining space along with a further 2,000sq m for future-proofing. The vast space is split 54% for retail and 46% for food & beverage.

Gulf Air, the national carrier of the Kingdom of Bahrain, operated the very first commercial flight from the new Bahrain International Airport terminal which was GF2130 to Delhi on the inauguration day. The first incoming flight to the new terminal was also a Gulf Air flight that arrived from Lahore on flight GF765 at 1450 local time on the airline’s flagship aircraft the Boeing 787-9 Dreamliner. Moreover, bidding farewell to the old terminal, Gulf Air operated the last flight from the old premises which was GF504 to Dubai on Airbus A320neo at 1055 local time. With these operations, Gulf Air started a new chapter in the Kingdom of Bahrain’s aviation history.

The new terminal will support the strategic vision for Bahrain to strengthen its position as a hub and facilitate the movement of millions of passengers and Gulf Air takes pride to be a vital operator in the state-of-the-art terminal. The new airport terminal will feature a dedicated check-in area for both Falcon Gold and economy class passengers of Gulf Air as well as a brand new Falcon Gold lounge that is double in size and capacity compared to the previous one in the old airport.

Bahrain International Airport’s (BIA) new Passenger Terminal also offers a wider range of facilities and services to ensure travelers enjoy a convenient and memorable airport experience. The new airport’s retail areas are three times larger than the legacy terminal, featuring a broader selection of local and international brands and a diverse range of food and beverage (F&B) outlets. Among the major new additions are the Bahrain Airport Hotel & Spa, an airport clinic, comfortable lounges for Arrivals, Departures, and unaccompanied minors, and a variety of Duty-Free offerings.

Bahrain Duty-Free anchors the retail space, having captured the concessions for core category duty-free (around 3,250sq m) and for speciality retail (1,500sq m).

Bahrain Airport Company (BAC) Chief Commercial Officer Ayman Zainal said: “One of our most important goals is to deliver an improved travel experience. Airports have grown to become much more than just waiting areas for the next flight. They serve as important shopping and dining destinations in their own right, which is why BIA has ensured that a wider range of outlets and brands. With 3,300 sqm of Duty-Free space in the Departures Area, 541 sqm of Duty-Free space in the Arrivals Area, 21 cafes and restaurants, an airport clinic, and the Bahrain Airport Hotel & Spa, the airport caters to the needs of virtually all types of passengers. The terminal’s boutique design means you can traverse the arrival and departure areas more quickly than at any other regional airport, which gives you more time to enjoy all the amenities the airport has to offer.”

SSP Bahrain, which is comprised of three shareholders, SSP Cyprus, Buhindi Group and, Gulf Air Group Holding will operate 17 F&B units at BIA. In addition to some well-known quick-service favorites and local brands, SSP will launch several debuts, including the first TGI Fridays at an airport in the Gulf, and Bahrain’s first Jamie’s Deli and Pizzeria – a combined concept from celebrity chef, Jamie Oliver.

Parking at the new terminal is more efficient and economical with a range of short and long-term parking facilities that can accommodate approximately 5,500 vehicles. The short-stay Multi-Storey Car Park is a standout element, housing a taxi staging area, a car wash, staff parking, automated payment machines, and dedicated spaces for people with special needs. Car rental and valet services are also available.

The surface cark park, Car Park D, is aimed at travelers wishing to park for longer periods of time. The cark park is a short bus ride to the terminal, which is located opposite. Complimentary shuttle services operate to and from the car parks.