Have you ever wondered about the differences...
SocietyPR This WeekBIC crowns newest Bahrain drag racing champions in end-of-season awards ceremony 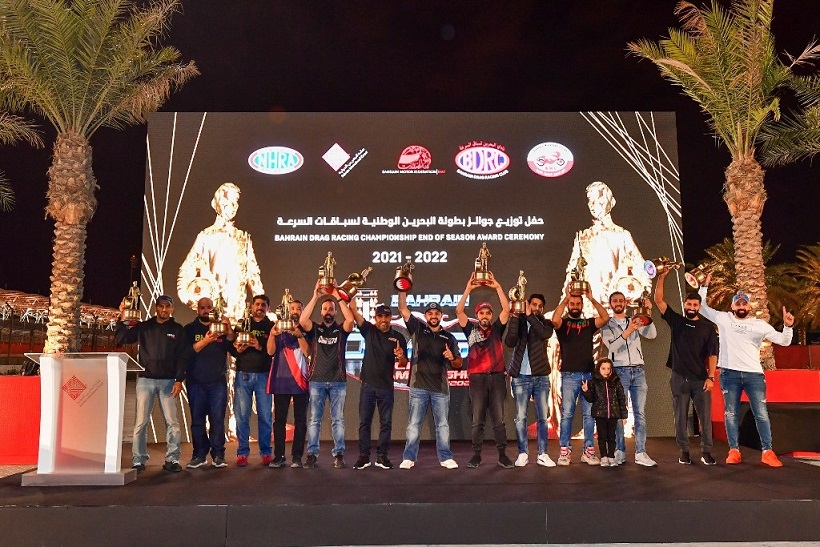 Bahrain International Circuit (BIC), “The Home of Motorsport in the Middle East”, crowned on Saturday night the champions of the 2021/2022 Bahrain Drag Racing Championship.

The region’s leading drag racing series wrapped up its latest campaign with the fifth and final round on Friday, and the season’s titles were handed out in the official awarding ceremony held at the BIC Paddock. BIC COO Fayez Ramzy Fayez was in attendance, along with other officials from BIC, the Bahrain Motor Federation (BMF) and the Bahrain Drag Racing Club (BDRC), as well as winners and participants from the championship.

The newest champions were each presented with a highly coveted Wally trophy—the highest honour in the sport of drag racing awarded only to champions of events sanctioned by the U.S.-based National Hot Rod Association (NHRA). The world-class BIC drag strip is a member of the prestigious NHRA Worldwide Network.

Hamdan Juma from the UAE rounded off the title winners by taking the Index 9.0 category.

There was plenty of exciting action in the season-finale with some titles still to fight for and despite others already being decided.

Bahrain1’s Al Balooshi was assured of his crown heading into the meeting—having won three of the previous four rounds—but was still determined to finish on a high, and he did just that. He won his final elimination with a pass of 3.744 seconds at 319.53kph to beat Muslem Alqallaf’s 3.984s run. Bahrain1 teammate Stevie Jackson from the U.S., the back-to-back reigning NHRA Pro Mod world champion, was classified third.

Eight of the other champions were also able to win in the season-finale.

Elsewhere in the round, Hussain Abduljalil won amongst the 8.5 Index runners after beating Ahmed Sarhan with an 8.531s pass at 260.20kph. Mohammed Suliman clinched the 7.5 Index class with a 7.604 final pass at 283.57kph to narrowly defeat champion Al Hadad’s 7.725s time. Bassel Ebrahim Abbas won the Competition 4.5 category with a run of 4.509s at 244.17kph, beating the 4.550s mark of Ebrahim Abdulla. Nasser Al Kubaisi completed the winners’ list with his triumph in the Street Fight Bikes 9.5 division, where he had a 9.695s time at 223.51 in the final elimination, outduelling Yusuf Hilal.

The 2021/2022 season of the Bahrain Drag Racing Championship featured participants from across the GCC and the U.S. Each round was well-participated, with competitors reaching record numbers of up to 225 in a meeting.

The championship was organised and run by BIC, the BMF and the BDRC.