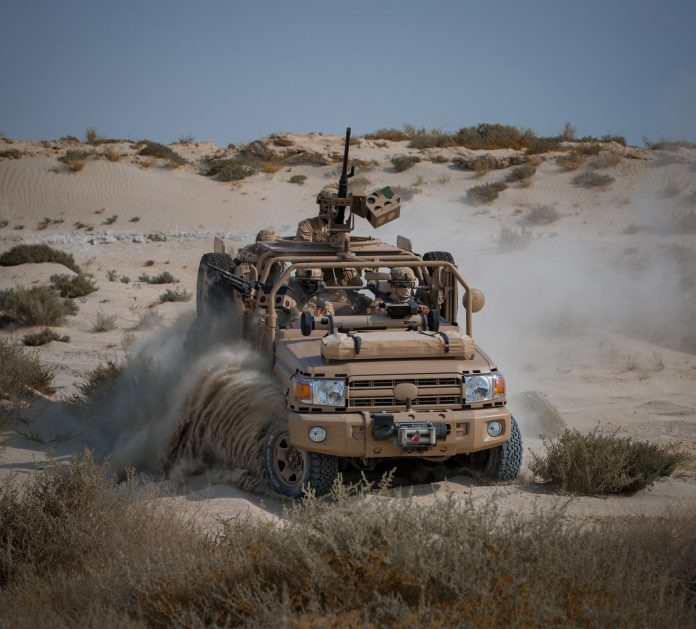 HH Shaikh Nasser praised the enormous efforts to maintain Bahrain’s leading rank in hosting unique events and conferences specialised in the security and military fields. The long-standing work of preparing for BIDEC was due to the importance of this event which accommodated major security and defence service providers with senior officials in the military sector to exchange views and ideas on the latest developments in both industries and how to develop partnerships among them.

HH Shaikh Naser explained, “The dream has always been great, but the reality has become even more beautiful after the remarkable success of BIDEC, as well as the panel discussions that took place in the Middle East Military Alliances Conference, which brought together senior military leaders and spokespersons specialising in strategic and political affairs.”

HH Shaikh Nasser praised the members of Derasat to make the first edition of BIDEC a huge success. This came during his reception to HE Dr Shaikh Abdulla bin Ahmed Al Khalifa, Chairman of the Board of Trustees at the Bahrain Centre for Strategic, International and Energy Studies “Derasat” and Spokesperson and Chairman of MEMAC Organising Committee  and members of the organization.

For his part, HE Dr Shaikh Abdullah, who is also a member of the High Organising Committee of the event, said that the Kingdom of Bahrain is a peace force that calls for and contributes to the establishment of peace and stability in the world

“The High Organising Committee led by HH Shaikh Nasser has well understood the importance of military alliances to establish security and stability in the world in cooperation with brotherly and friendly countries. Therefore, the Committee decided to hold its first exhibition and conference in partnership with the Arab Coalition for the Support of Legitimacy in Yemen and the Islamic Military Alliance to Fight Terrorism as well as NATO. The initiative has been met with wide praise regionally and internationally. Thus, this calls us for reflection and preparation from this moment to organise the next edition of BIDEC,” HE Dr Shaikh Abdullah said.

HE Shaikh Abdullah further stated that “We had almost 9120 visitors from different parts of the world who visited the exhibition to see latest technology and equipment from different defence and military countries. There were further five events taking place around Bahrain where over 1000 people attended the activities. MEMAC held on the sidelines of BIDEC witnessed the participation of more than 800 military professionals, strategists, analysts, and representatives from specialised think tanks all over the world.”

Dr Shaikh Abdulla bin Ahmed Al Khalifa also said, “Further, it was a privilege to have Islamic Military Counter-Terrorism Coalition and Arab Coalition Forces supporting Legitimacy in Yemen, Saudi Arabia as our partners, and we are very glad to sign the $3.8 billion deal for the purchase of Lockheed Martin’s F-16 Block, 70’s that we are most likely to receive by 2021.”

Outstanding success of BIDEC 2017 will strengthen the global confidence in Bahrain’s huge organisational potential thanks to its loyal and creative cadres, advanced infrastructure, political and security stability, as well as economic and media progress, in light of HM the King’s leadership and patronage of the prestigious event.

Obtaining or renewing visas in the Kingdom of Bahrain is a relatively simple procedure. All you need to do is ensure that your documents...
Tech