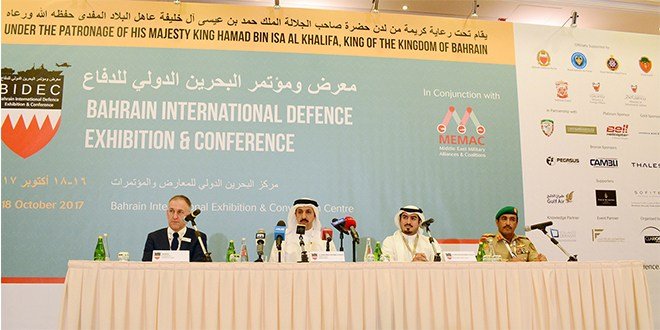 Press Conference to announce the opening was held at the Bahrain International Defence Exhibition & Conference on 15th October in the presence of senior officials and media.

HH Shaikh Nasser bin Hamad Al Khalifa extends his heartfelt thanks and gratitude to His Majesty King Hamad bin Isa Al Khalifa, the Supreme Commander, for his patronage of this prestigious international event.

commented earlier on the BIDEC by saying, “In the context of strengthening the Kingdom of Bahrain as a centre for entrepreneurship and as an attractive environment for the exhibition industry in the region, the Kingdom of Bahrain, under the patronage of His Majesty King Hamad bin Isa Al Khalifa, will host the Bahrain International Defence Exhibition and Conference (BIDEC), 2017.

Hosting of such a major international event in the Kingdom of Bahrain, is a reflection of the aspirations of the wise leadership, and demonstrates Bahrain’s competitive advantage as a forum for cultures and civilizations and a place of dialogue and peace.  The exhibition, considered one of the first comprehensive international defence exhibitions and conferences in the region, covering land, sea and air, will bring together top leaders and military experts and representatives of major manufacturers of military defence equipment and systems in one location. The exhibition acts as a regional platform that will bring together the world’s best defence and security organizations to network with governments and military personnel, and to showcase the latest technology and equipment.

Bahrain’s hosting of the first edition of BIDEC underscores a number of important facts. The exhibition industry in the Kingdom of Bahrain has been very successful and the BIDEC exhibition and conference is one more example of this success. This will give the Kingdom a foothold on the international map in this vital investment and promotional field, with the aim to achieve excellence and produce creative ideas in the industry.

H.H. Brigadier General Shaikh Nasser bin Hamad Al-Khalifa described the event by saying that, what the world is witnessing today is the result of successive events that cast a shadow over regional and international security, highlighting the necessity of military alliances to confront existing challenges and coordinate efforts to make the world a secure one. (MEMAC 2017) and the Bahrain Defence Force, in cooperation with the Bahrain Center for Strategic and International Studies and Energy (DERASAT) are launching the conference on the evening of the first day of the exhibition at the Four Seasons Hotel. The conference sessions will be held on the second day at the Bahrain International Exhibition and Convention Center and will discuss critical issues related to military alliances in the region. The conference will highlight the importance of military alliances, and it offers an opportunity to exchange ideas, views and strategic visions of participating alliances, and to discuss the latest regional and international security and military developments.

A number of important events will be hosted at the exhibition, which will enhance Bahrain’s position as a leading destination in hosting international events and enhance the exhibition’s role. The exhibition will include many spectacular shows in various locations in the Kingdom, offering parachute, archery, military vehicle and combat shows.

The participation in the exhibition is broad and includes major international companies specialized in the defence industry. More than 50 senior military and political leaders, politicians and decision-makers from various fraternal, friendly and allied countries will take part with over 180 international exhibitors, manufacturers and providers of the latest equipment and technology and military systems.  There are 115 platforms in the exhibition that will attract decision makers from governments, armies and defence industries from more than 60 countries. The conference will additionally feature 800 participants from within and outside the Kingdom. More than 20 expert speakers from around the world will participate in the conference and more than 3000 visitors from inside and outside the Kingdom will attend the exhibition.

The conference is organized in partnership with the Islamic Military Counter-Terrorism Coalition, the Arab Coalition Forces to Support Legitimacy in Yemen, and participants from major international military alliances such as NATO and UN Peacekeeping, as well as representatives of leading international think tanks.

The conference aims to shed light on the integral role of military alliances in combating extremist terrorist organizations such as Daesh, Hezbollah, Yemeni revolutionary groups and others that threaten global security and stability. The approach will highlight the nexus between politics, diplomacy and military action.  In addition, sessions will focus on the challenges facing Joint Operations and Central Command structures and the political and diplomatic constraints to creating an equitable and effective collective defence mechanism.

H.E. Shaikh Abdulla bin Ahmed Al Khalifa, the Chairman of Bahrain Center for Strategic, International and Energy Studies (DERASAT), the Chairman of MEMAC, and the Spokesperson of BIDEC, said: The Conference is an important event in today’s changing world. Through this international Conference, we hope to establish platforms for open discussion and strategic ideas to build bridges of understanding so that we can find acceptable solutions to existing challenges and work towards regional and global peace, security and stability, as capacity-building and sharing of information is critical to building such a common vision. ”

Shaikh Abdulla bin Ahmed Al Khalifa thanked the Chairman of the Supreme Organising Committee of the Bahrain International Defence Exhibition and Conference (BIDEC), His Highness Brigadier Shaikh Nasser bin Hamad Al Khalifa, Commander of the Royal Guard, saying, “The Middle East Military Alliances and Coalitions is supported by H.H and all obstacles have been overcome so that the BIDEC exhibition and conference can become a leading international defence fair under the patronage of His Majesty King Hamad bin Isa Al Khalifa, the Supreme Commander.

He pointed out that this international conference examines two main aspects: the strategic political perspective of military alliances and the military operational perspective. It represents a global platform for exchanging ideas and opinions on security and military developments in the regional and international arenas The participation of  the Arab Coalition Forces to Support Legitimacy in Yemen and the Islamic Military Coalition to Counter Terrorism under the leadership of Saudi Arabia, gives specific focus to counter terrorism and attempts to destabilize the security and stability of the countries of the region.

Dr. Shaikh Abdulla bin Ahmed Al Khalifa expressed his pleasure that DERASAT will be an active participant in the conference, in line with its role in spreading peace, establishing the foundations of dialogue and serving sustainable development.

The CEO of Bahrain Authority for Tourism and Exhibitions H.E. Shaikh Khalid bin Hamood Al Khalifa said that the Bahrain International Defence Exhibition and Conference 2017 further positions the Kingdom on an international level. Such large scale events portrays the Kingdom’s capabilities among the Arab and international markets. The event will act as a platform to exhibit the latest trends within the defence and military sector that can contribute to the growth and development of the military infrastructure in the MICE sector.

H.E Shaikh Khalid bin Hamood Al Khalifa Said, The Bahrain Tourism and Exhibitions Authority is proud that the Kingdom of Bahrain is  hosting such a strategic event that positively reflects on the tourism and economy sectors of Bahrain; and moves forward the economic and tourism progress through the massive participation of attendance and visitors.

Mr. Tim Porter, the Managing Director of Clarion Defence & Security Clarion Events, the largest organiser of defence and security events in the world said, “As a launch event into a new market, BIDEC has surpassed our expectations across all areas, and we are expecting a fantastic turnout from visitors across three days.”