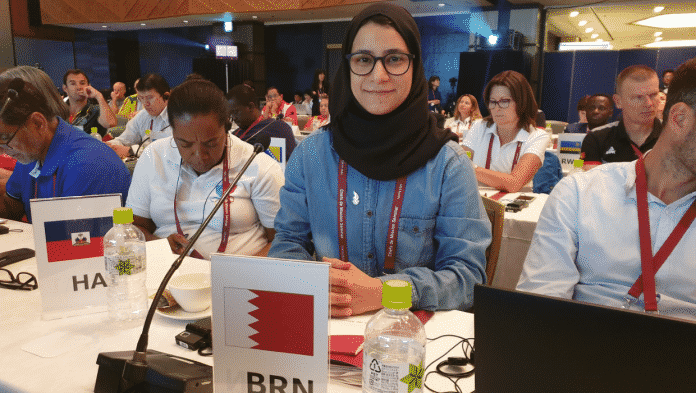 Bahrain Olympic Committee (BOC) Arab and International Relations representative Maryam Mardana attended the Chefs de Mission seminar in Tokyo as a build up to the 2020 Olympics that will take place in the Japanese capital from July 24 to August 9.

This three-day seminar was hosted by the Tokyo 2020 Organising Committee of the Olympic and Paralympic Games, as over 400 representatives from National Olympic Committees (NOCs) around the world including the Chef de Missions of participating countries to next year’s Olympic games gathered in Tokyo for the seminar.

One-to-one meetings were held to discuss and address individual needs participating countries may have. Chef de Missions from the Oceania regions 17 countries were also present in Tokyo for the seminar with venue tours a key element of the program.

Tours were planned for the Olympic Stadium, Aquatics Centre, Olympic Village as well as the Heritage Zone and Tokyo Bay Zone.

Northern Governor, Ali bin Al-Shaikh Abdulhussain Al-Asfoor, has asserted that the disinfection campaigns carried out by the Northern Governorate are part of the national...
iGA

Gulf Air, the national carrier of the Kingdom of Bahrain, has appointed Sh. Ali bin Mohammed Al Khalifa as Director Strategy and Planning to...
Entrepreneurial Journey

I never thought of advertising my business when I was a small shopkeeper. The word-of-mouth publicity among customers was sufficient for me in those...
Sports This Week

Gulf Air, the national carrier of the Kingdom of Bahrain, is proudly announcing that it will resume its direct Abu Dhabi and Dubai flights...
Wheels and Gears