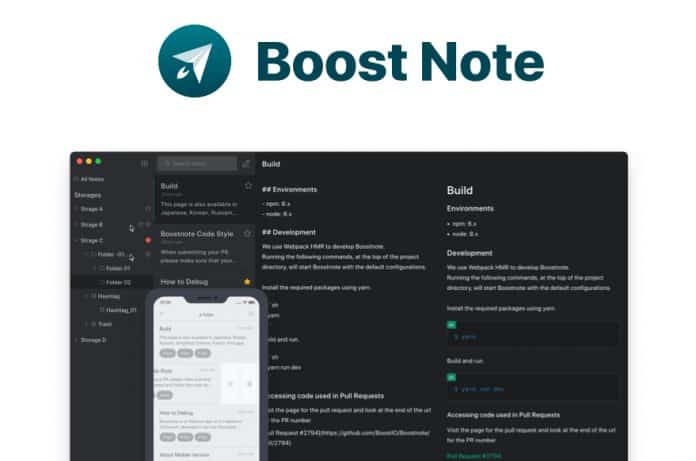 If you are a programmer, you must be taking a lot of notes, which come from all sorts of ideas in your head. To ensure that you save the notes in an organized and structured manner, you need a solution specifically designed for the developers.

This is exactly what ‘Boost Note’ https://boostnote.io/ – an intuitive and stylish markdown editor for the developers – has already done. Developed by a company called ‘BoostIO’, Boost Note is available as a fully open-source desktop app for Mac, Windows and Linux.

With more than 600K downloads and 1.6k GitHub star, Boost Note had already hit the bull’s eye. But, the co-founders, Kazz Yokomizo from Japan and Junyoung Choi from South Korea, realize that the journey has just started.

They have now launched a much improved version of Boost Note’s desktop app, which comes with a lot of interesting features. Even with the current version, Boost Note has made note taking really easy for the developers. BoostIO (https://boostnote.io/) has just launched a mobile app for both iOS here and for Android here.

BoostIO’s vision is to liberate everyone’s creativity and that’s exactly what the app does. It allows the developers to save their markdown notes automatically as they write. It comes with semi-live previews so that you can double check as you write.

The app can highlight code syntax in more than 100 languages, including Javascript, Python, Go, Swift, and Vue, for code snippets. These features have made Boost Note a huge hit among developers.

Now, to take the game to another level, the company has launched new Boost Note app. The new version enables the developers to save the notes in the DB and store the data in local because of git-like file system called CouchDB and PouchDB.

Using file system can be quite risky, while DB based storage is much safer. The team has used PouchDB for the new version, which will take care of problems arising out of different operating software (OSs).

In the new version, the developers will be able to use cloud storage, which will make it easy to sync data multiple devices. In other words, it will make programming much more convenient.

To improve development experience, the team has used Typescript in the new version. All these changes will definitely make note saving a lot easier for the programmers.

There are other features too in the latest variant. For example: It will have multiple color themes, 150+ syntax highlights and localizations.

The company will also launch Boost Note’s mobile app soon for Android and iOS platforms so that the users can manage their notes from anywhere without really having to be in their office.

With such improvements, Boost Note will provide a never-seen-before experience to the developers. Its new features will ensure that the programmers don’t feel any limitations in transforming their ideas into real-life solutions.