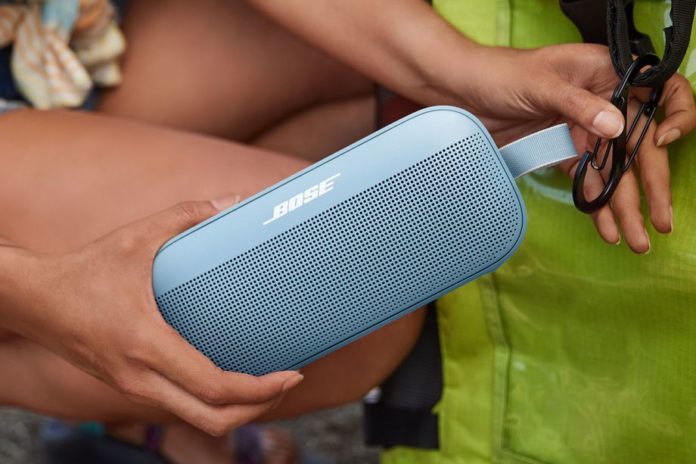 Bose is introducing its first new portable Bluetooth speaker in quite a while. The  SoundLink Flex has a ruggedized design with an IP67 rating for dust and water resistance, 12-hour battery life, and what Bose claims is “astonishing” audio performance for its size.

At 7.9 inches wide, 3.6 inches high, 2.1 inches deep, and weighing slightly over one pound, the SoundLink Flex is nicely compact and has a built-in utility loop for attaching to a carabiner. It’ll be sold in three colors: there’s black, smoke white, and blue.

Inside the SoundLink Flex is a custom transducer that Bose says is “as big as could fit” and capable of producing “bass that you can feel in your chest.” Using a feature that Bose calls “PositionIQ,” the speaker can detect what orientation its in — upright, hanging, or flat on its back — and tune audio output accordingly.

The speaker has a silicone back and powder-coated steel grille, and Bose claims it’s designed to resist corrosion and fend off any discoloration from UV light. With that IP67 rating, it’s a pool-safe speaker, and Bose says it’ll float to the surface when dropped into water.

There’s nothing particularly “smart” about the SoundLink Flex, but it can be linked up with any Bose smart speakers or soundbars you’ve got at home. And you can stereo pair it with another SoundLink Flex or a different Bose portable speaker. There’s also a built-in microphone for taking calls and interacting with the voice assistant on your phone. (Bose still sells the much pricier Portable Smart Speaker for $400 with built-in voice capabilities, but you can do better for less money than that.)

The SoundLink undercuts products like the Sonos Roam, though it doesn’t match that speaker’s wide set of features. Bose also has to contend with impressive Bluetooth speaker competition from JBL, UE, and others. Still, the company’s portable speakers have a way of sounding much better than you’d expect based on their size, so I’m looking forward to hearing what the SoundLink Flex is capable of.