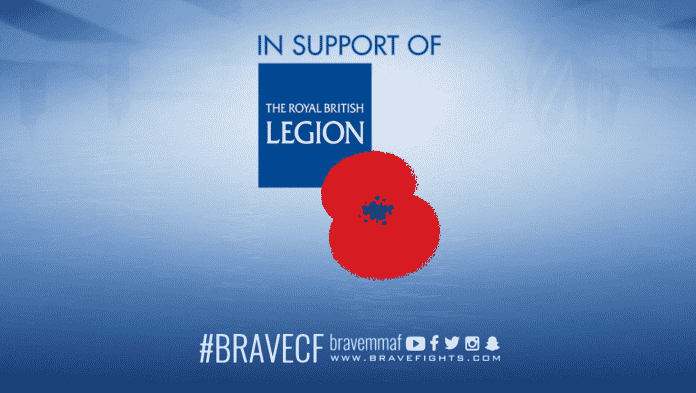 July 21, 2019
Facebook
Twitter
Pinterest
WhatsApp
Linkedin
BRAVE Combat Federation is not only holding an auction event to empower mixed martial arts in Europe with BRAVE 24: London, set for July 25th, at the Copper Box Arena. The fastest-rising promotion in the world is looking to give back to the British community by holding a charity auction with all proceeds going to the Royal British Legion. And the items have been announced, some of which will leave sports fans drooling.
For starters, BRAVE CF 24: London will auction an autographed photo of Muhammad Ali, one of the greatest sportsmen to ever grace the planet, who passed away three years ago. The signed picture portrait is from Ali’s Fight of the Century contest against Joe Frazier, issued with a Certificate of Authenticity provided by HPM.
The influencers, celebrities, businessmen, and politicians that are interested in football will also be tempted to bid on two massive items. The Brazil Authentic Jersey autographed by the National Team that recently won the Copa America in their home turf will be up for bids, as will a Real Madrid jersey autographed by left-back Marcelo, one of the best players in the world for the past ten years.
Fans of adrenaline and history will also have a reason to contribute with the amazing work that the Royal British Legion does, as a sightseeing flight on board of the Royal Air Force’s T6 Harvard, one of the most iconic aircraft in the RAF’s fleet, will be up for bidding. The 2014 Poppy Appeal Tower of London Exhibition was one of the most iconic art gatherings in recent memory, and the VIPs attending BRAVE 24: London will have the chance of taking home a memorabilia of the exhibit, with one of the 888,246 ceramic poppies “planted” in the Tower of London’s moat will be up for bidding as well.
Finally, one of the most sought-after items will definitely be a trip to Bahrain. The Bahrain VIP Experience for the BRAVE International Combat Week will have two air tickets to the Kingdom of Bahrain, three nights of accommodation in Bahrain VIP tickets for the BRAVE ICW, and an overall VIP experience during the largest combat sports festival in Asia.
Facebook
Twitter
Pinterest
WhatsApp
Linkedin
Previous articleBahrain to host first-ever International Horserace
Next articleGulf Air Reaffirms Commitment to its Workforce Family