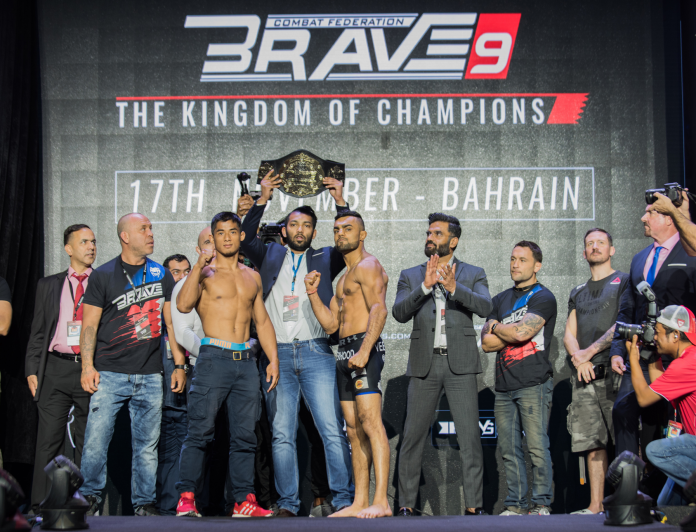 Brave 9 Relive Edition to be launched on 24 December

December 20, 2017
Facebook
Twitter
Pinterest
WhatsApp
Linkedin
Mohammed Shahid, President of Brave Combat Federation has announced the launch of the relive edition of Brave 9: The Kingdom of Champions, on 24nd December at 04:00 PM. The relive edition will be available for the worldwide audience. The content includes never before released interviews. Exclusive footages from the biggest mixed martial arts event ever hosted in the Middle East and prime celebrity attractions from Hollywood, Bollywood, MMA legends, pop singers and fighters.
While the content from the full fight week will be broadcasted on partnering platforms, the same will also be available worldwide on the official youtube channel of Brave Combat Federation. The event showcased live performances by Hala Al Turk and Hanan Redha, apart from celebrity presence made by global icons including Suniel Shetty, Illir Latifi, John Kavanagh, Frankie Edgar, Wanderlei Silva and many more. The 15 fights including the championship title fights will be showcased with the backdrop of all the major interviews conducted with athletes, MMA experts and legends during the fight week.
The Relive Edition marks for the first time a Middle East based sports media property is showcasing the master content of a show hosted in Bahrain to the worldwide audience. Brave Combat Federation had announced investing on digital engagements and hosting events in additional geographical locations worldwide. The Relive edition is showcased as the next step to extend the future of operations of the Bahrain based sports media property.
Facebook
Twitter
Pinterest
WhatsApp
Linkedin
Previous articleAlba CEO addresses Susquehanna University students
Next articleCalling Bahrain Home

Since the outbreak of Covid-19 that has unleash an economic downfall, Thai business collaborations continues, expanding business ties between The Kingdom of BAHRAIN...
Inside Arabia